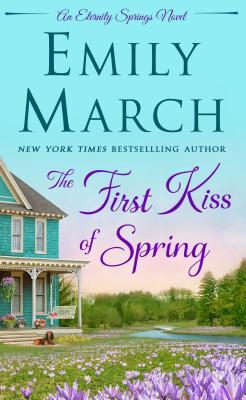 The First Kiss of Spring – Book 14

Where you can find The First Kiss of Spring: Barnes and Noble | Amazon

Spring has come to Eternity Springs in the newest installment in this New York Times bestselling series by Emily March.

When Josh Tarkington gets stuck on a gondola with the lovely Caitlin Timberlake, he thinks his consistently bad luck might have changed.

After their blossoming romance is interrupted, Caitlin realizes that her encounter with Josh was a sign that she needed to make a major life change. So she packs up her things and moves to Eternity Springs, opens a daycare, and sets her cap for the town’s mechanic—Josh.

But Josh is hiding a well of secrets that would ruin him, and his relationship with everyone in Eternity Springs—especially Caitlin. When tragedy strikes, Josh and Caitlin find themselves, and their relationship tested beyond imagining. Will they be able to find their way back to each other?

I enjoyed reading The First Kiss of Spring. This book is book 14 in the Eternity Springs series. If you have followed me for long enough, you know my views on picking up books mid-series. They revolved around not being able to understand the different storylines/characters. This book avoids that for the most part. I wouldn’t say that this is a stand-alone book but I would say that if you were to read it, you wouldn’t get lost. The characters from the other books do make appearances but they do not take over the storyline.

I knew that there was going to be some serious subjects discussed in this book. When drug addiction was introduced, I did an eye roll. I also said to myself “This is not going to be relatable and the character will be cured“. I was wrong to have that viewpoint. The author did a great job of bringing up that addiction cannot be cured in one rehab session. She portrayed the challenges a recovering addict faces while out in the real world. Also how one misstep can lead to them to relapse.

The First Kiss of Spring is set in the fictional town of Eternity Springs, Colorado in the present day. As a first time reader of this series, the author did a great job of introducing the town and the legend of the town. I won’t tell explain the legend. That is something better read.

Josh was such an enigma during the first half of the book. He came across as this happy-go-lucky guy who had a disabled dog. But, the author let clues drop that Josh wasn’t as happy as he seemed. When Josh’s background was revealed, I wanted to hug him and cry. He felt that he wasn’t good enough for Caitlin. A feeling that was reinforced by Caitlin’s father every time he saw him. When Josh finally came clean to Caitlin about his past, I wasn’t sure what to expect. Not what happened, that’s for sure.

Josh and Caitlin’s romance was sweet. Even though I thought that Caitlin was a spoiled brat, she did love, Josh. She didn’t give up on him. He was her other half and she knew it. It took him a bit longer to realize it. Then stuff happened. Bad stuff and it did drive a wedge between them. Caitlin was determined not to let him go or be alone. This is the part of the story I loved. She was the epitome of true love in those scenes. Even down to the “tough love” parts.

The sex scenes were hot. I was fanning myself after some scenes. Josh and Caitlin had some crazy hot sex.

I can’t get into the end of the book without revealing some major plot points. I will say that the ending was very well written and that the feels were anywhere. The storyline, along with the sub-storylines, were all wrapped up in a way that satisfied me. But, I am wondering if there will be a book 15. I got the feeling at the end of The First Kiss of Spring that this series is not done.

Pros of The First Kiss of Spring:

B) Set in Colorado

Cons of The First Kiss of Spring:

A) Caitlin. She acted like a spoiled teenage brat the first half of the book

B) Josh’s hardships. That man had everything but the kitchen sink thrown at him

C) Caitlin’s father. He was a little much the entire book and drove me nuts (like father, like daughter!!)

I would give The First Kiss of Spring a rating of Adult. There is sex and it is graphic. There is also language and mild violence. I wouldn’t recommend that anyone under the age of 20 read this book.

There are triggers’ in The First Kiss of Spring. If you are triggered by child abuse, drug addiction, and the talk of suicide then don’t read the book. While the child abuse is not graphic, enough is left unsaid that you get the gist of what the author is talking about. Same goes for drug addiction and suicide.

I would reread The First Kiss of Spring. I would recommend it to family and friends but with a warning about the triggers, I mentioned above. I would also suggest reading the earlier 13 books before reading this one. This is not a stand-alone book but it can be read like one. I would read the earlier books to get a better sense of what the series is about.

I would like to thank the publishers and NetGalley for allowing me to read and review The First Kiss of Spring.

All opinions stated in this review of The First Kiss of Spring are mine.

One thought on “The First Kiss of Spring (Eternity Springs: Book 14) by Emily March”