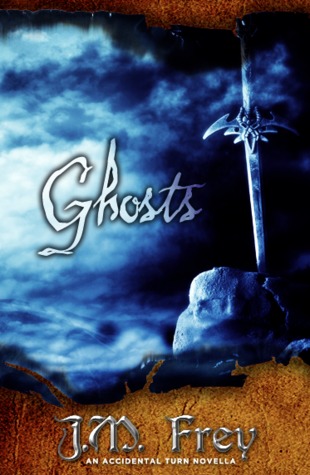 Where you can find Ghosts: Amazon | Barnes and Noble

For seventeen years, Bevel Dom has been the author of his own story. Or, rather, he’s been the author of The Tales of Kintyre Turn, the illustrated scrolls chronicling his adventures as first the squire, then the colleague, and then finally the friend of legendary hero Kintyre Turn. But there are some stories that Bevel doesn’t write down, doesn’t tell to eager audiences of bright-eyed boys and sighing bar wenches in taverns. Some he simply folds into his heart and keeps. This is one of those tales.

In this prequel novella, fans of The Accidental Turn Series are offered a glimpse into the lives of Bevel Dom and Kintyre Turn shortly before their arrival at Turn Hall and the events that follow, further expanding upon the world and characters seen in The Untold Tale and the the upcoming sequel, The Forgotten Tale, coming Summer 2016.

I do not like to read short stories unless they are part of a series and if I have read the books in the series. Thankfully, I have read the first two books of The Accidental Turn series. So I had no issues following Ghosts storyline.

Ghosts are set in the kingdom of Hain which in turn is set in the book “The Tales of Kintyre Turn“. Told from Bevel’s first-person perspective, I learned that Bevel was in love with Kintyre. Kintyre only acknowledged his feelings for Bevel during the many threesomes that they shared. Bevel has had to settle for being Kintyre’s best friend instead of lover. Bevel is growing tired of living a lie. After a disastrous adventure, Bevel and Kintyre are summoned home. Can Bevel gather enough courage to tell Kintyre how he feels about him? Or will he be forever destined to Kintyre’s adventuring companion?

I liked Bevel. I will admit, my view of him was a bit skewed. I still hadn’t gotten over certain events in the earlier books. But that was cleared up when I read and realized how much he loved Kintyre. I don’t think I truly got it until I read this book. I didn’t like how he viewed Forsyth. But, going with when this story takes place, I can understand why he had a negative perspective of Forsyth.

Kintyre, I wanted to shake some sense into him. How could he not know how Bevel felt about him??? Even complete strangers could see that. He did remind me of an overgrown child during parts of the story. He rushed into situations without assessing them and he didn’t listen to Bevel at all. But, regardless of all that, I did like him. I got more understanding of his character and why he was such a bully to Forsyth.

The secondary characters were the backbone of Ghosts. It was these characters that gave this short story the extra oomph that it needed.

I stated in earlier reviews, I thought that the LGBTQIA characters were very well represented. I loved that same-sex marriages (ie jumping the broom) were accepted as normal.

I can’t get into the end of Ghosts without revealing important plot details from the full-length books. Let’s say that I was happy with the way everything turned out!!

A) Got to know Bevel and Kintyre better

B) Got to see more of Hain and its inhabitants

A) Kintyre being so obtuse

C) Going after the ghost!!!

I would give Ghosts an Older Teen rating. I would suggest that no one under the age of  16 read it. There are mild violence and mild sexual situations. Nothing that gets into depth. There are no trigger warnings for Ghosts. So safe for everyone to read.

Ghosts is a short story that I would reread. I would recommend to family and friends.

I would like to thank J.M. Frey for allowing me to read and review Ghosts.

All opinions stated in this review of Ghosts are mine.