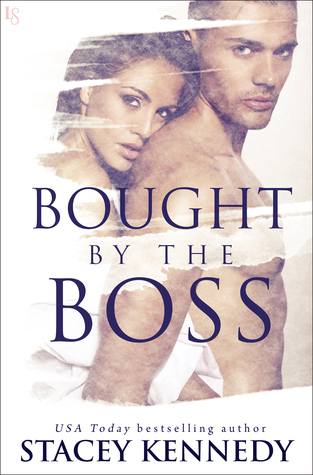 3.5 Stars (rounded down to 3 for Goodreads, NetGalley, Barnes and Noble and Amazon)

Where you can find Bought by the Boss: Amazon | Barnes and Noble

What’s better than one bad-boy boss? How about two?

In a duet of naughty novellas, a charity date auction turns into all-out war when a pair of powerful corporate lawyers each buy the other’s assistant for a weekend of seduction.

HIS PRICE
I’ve wanted Aria Finley from the moment I met her.
We flirt, we laugh, we connect. It could be perfect.
She’s even best friends with my assistant.
Problem is, she works for my archnemesis—Jackson Keller—and she’s the kind of girl who stays loyal unless you give her a reason not to.
Besides my hard-on, there’s something hot between us, and I won’t rest until I put my finger on it.
So when I get the chance to buy Aria for the weekend at a charity auction, there’s no limit.
I’m going to take her home and take what I want because I’ll make her want it too.
And by Monday, she’ll know she’s mine.

DIRTY MONEY
Liam Maxwell thinks he can get to me through my assistant, Aria.
Well, two can play that game.
Now Mallory Beckett—Liam’s assistant and Aria’s best friend—is mine for the weekend.
Only she has no idea who bought her at the charity auction.
This is going to be worth every penny.
But soon I realize that Mallory has been waiting for my touch all along.
What starts as a fling turns into something more.
From the beginning, I was so focused on stealing her away.
I never thought about the fact that I’d drown if I lost her.
Now the game has changed. And she needs to know that she belongs to me.

With Christmas fast approaching, my stress level was through the roof. I needed to read a book that I could read and have to worry about the plot or the characters. Bought by the Boss wasn’t that for me. But, I couldn’t get into it. The characters annoyed me to the point where I wanted to smack them. The plotlines were flimsy.

Bought by the Boss is made up of two books, His Price and Dirty Money. Both stories are told from alternating male and female first-person perspective. While I don’t like it when a book changes perspectives every chapter or so, it did work for this book. It gave me a great insight into the characters of each story and the backstories that went with each. It also connected each character together. Which is something that I rarely have seen done when books are written from this perspective.

His Price is Liam and Aria’s story. Aria is in one of those “buy the girl and spend the weekend with them” charity auctions. Liam and Aria have known each other forever. They have wanted each other forever. The only thing keeping them apart was that Aria is the PA for Liam’s arch nemesis, Jackson. So when Liam sees an opening for having Aria all to himself, he jumps for it. Neither Aria or Liam were expecting their weekend to turn into something more.

Dirty Money is Jackson and Mallory’s story. Mallory is Liam’s PA and she was won by Jackson at the same charity auction that Liam bought Aria at. Jackson’s buying of Mallory is fueled by rage. He is PO’d that Liam is having alone time with Aria….even though he has no romantic feelings for her. Mallory, on the other time, has been crushing on Jackson for a while. She decides to go for it when he whisks her away to Canada. What happens in Canada stays in Canada, right? Can Jackson make peace with Liam and get the girl? Or will he strike out with both?

I did not like Liam. At all. Something about him rubbed me the wrong way. He came across as very cocky. I like cocky but he was too much. My distaste for him started with the gold dildo he sent Aria. Then increased the entire time they were in Malibu. It peaked when he had her get off in a restaurant with the waiters watching. I did lose some of my distaste when he revealed why he was so afraid to approach Aria in the past. If I had been burned like that, I would have been afraid. But then it turned right back up when he started acting like a dog marking its territory with Jackson. Even though it was understandable, it still turned me off.

But, I did like Jackson. I felt he was more upfront about everything than Liam was. He was still cocky but he toned it down when he brought Mallory to Canada. He became more personable and likable after the first few chapters. It was nice to see him become normal instead of keeping that cocky persona. Also, when his side of the story was revealed, I understood. Put it this way, actions speak louder than words and Jackson chose to act when talking failed. Then he tried to talk. Which ended badly for everyone.

I liked Mallory. She knew what she wanted and went after it. Much to Jackson’s surprise. She showed Jackson, through actions and words, that she was the perfect girl for him. More importantly, she listened. She also knew when to back off and let him come to her. She also didn’t feel the need to explain her relationship to Liam. Like I said, I liked her.

The sex in Bought by the Boss was hot. For those who don’t like graphic sex scenes, don’t read these books. Because they are graphic. I like all sorts of sex scenes but I tend to gravitate to the graphic when the mood is right. Even if I don’t like the characters (which I didn’t like two out of the four), the sex can still be hot.

I mentioned at the beginning of the review that I thought the plotlines of the book were flimsy. Let me clarify. I felt the plotline for His Price was flimsy. I felt that sex was used to distract the reader from the fact that there wasn’t a plotline. Which again, drove me nuts because I liked Dirty Money. I felt that the plotline was more complete and solid than His Price.

The end of Bought by the Boss was sweet. I was not expecting what happened to happen but it made me happy. Happy endings make me very happy.

Bought by the Boss was a sexy read. While I didn’t like His Price, I felt that Dirty Money eclipsed it. Which is why I gave the book a 3.5 rating. This is a book that I could reread but I am not sure if I would recommend it to family and friends.

I would like to thank Loveswept, Random House Publishing Group and NetGalley for allowing to read and review Bought by the Boss

All opinions stated in this review of Bought by the Boss are mine.