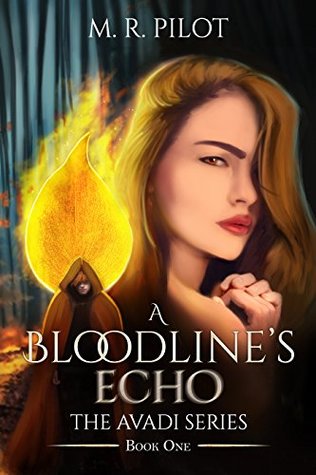 Where you can find A Bloodline’s Echo: Amazon

Cori discovers she has a strange ability. An unpredictable stranger lets her know she’s not the only one.

When her will is tested in the face of the unexpected: romance, friendships, betrayal, and a mysterious connection to an equally mysterious ancestor, how will she prevail?

Join Cori on her journey of finding out who she really is.

Eighteen-year-old Cori has been tucked into a corner of Verbena her entire life. With no memory of a father and an abusive mother, her escape came in the form of living and working in her town’s inn, a place that happens to be owned by her best friend. Cori was all but resigned to the uneventful and dutiful life as a barkeep. That is until a hooded stranger showed up – just in time to witness an incident Cori herself cannot believe – and changed everything. Now Cori must leave Sagebrush, the only place she has ever known, setting off to discover love, adventure, heartbreak, and more about herself and the world she lives in than she could have ever imagined.

A Bloodline’s Echo is one of those books that grab your interest from the beginning and keeps it to the end of the book. It has a memorable female main character. The secondary characters are vivid. The plotline is interesting. This was a book that I enjoyed reading.

I felt bad for Corinth (aka Cori). She had such a hard life. Her mother was abusive and her father was long gone. She had a lot of anger built up inside of her. I would have too if that were my life. So when her powers manifested in a way that caused damage, she felt that she had no choice but to leave. I did think that she was way too trusting. She trusted Rylo right from the beginning. She trusted the Kamai when she met them and so on. She did catch on to people as her power grew but still. The instant connection that she had with Queen Tazmina was interesting.

Rylo was very hard to get a handle on. He let few clues out about what happened to him when he was a child and where his family was. I also thought that he was a spy for the Akaram for 90% of the book. The only thing that I didn’t doubt was his feelings for Cori. I also didn’t doubt his anguish of not allowing himself to become involved with her. I was very surprised when it was revealed what happened to him when he was younger. Not only was I shocked by what happened but by who did it and who was behind it. He also proved himself in my eyes by doing what he did at the end of the book.

I thought that the different groups of people were interesting. You have 3 groups of people: the Avadi, the Naida, and the Bagata. The Avadi are people who traits (which are physical and mental) that have become Awakened. They are able to use them for good or bad. The Naida are people who have traits but they are not Awakened. They can either know that they have traits or it comes as a surprise. The Bagata are people with no traits. They are unaware of the Avadi and the Naida. There are also different factions within the Avadi. They are the Kamai and the Akaram. The Kamai is the good Avadi. They protect the Bagata against all sorts of threats, known and unknown. The Akaram are the bad Avadi. They attack the Kamai any chance they could get and didn’t care if the Bagata got hurt.

A Bloodline’s Echo begins when Cori leaves the inn she works at after having her trait manifest. She meets Rylo on the road and he takes her to where the main hub of the Kamai is. It is there that one of the Kamai Elders goes missing. Cori and Rylo are chosen to go find him. Following his trail, they soon realize that all signs point to the King. When they arrive at the capital, Cori is in for a surprise. A huge surprise. But that surprise is eclipsed by when she thinks is Rylo’s betrayal. She finds that everything that she thought she knew was false. The truth will either bind her to the new King or it will set her free.

The ending of A Bloodline’s Echo was action filled.  There are a dramatic rescue and plans that will lead to the 2nd book. The epilogue was very interesting and I can’t wait to see what will come from that.

I would give A Bloodline’s Echo a rating of Older Teen. There are mild violence and sexual situations. No sex but a lot of kissing and heavy petting.

This is a series that I am looking forward to reading. I would recommend this book to family and friends. I also would reread this book.

I would like to thank M.R. Pilot for allowing me to read and review A Bloodline’s Echo.

All opinions stated in this review of A Bloodline’s Echo are mine.