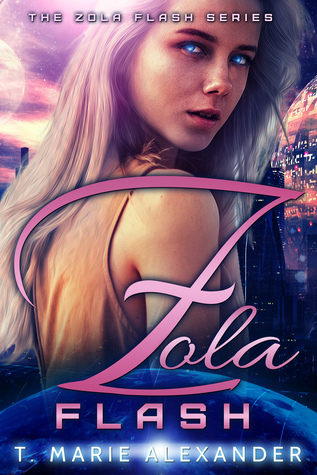 EVEN THE INNOCENT CAN BE MARRED BY WAR.

Zola is a Victian. And for as long as she’s been alive, her planet has been at war with the ruthless, demeaning Payohlini.

After witnessing the gruesome murder of her family, Zola Flash decides it is time to escape with the one person she was taught to hate before she meets the same fate. Earth seems to be the perfect place to hide out – to pretend her whole life didn’t come crashing down.

While on Earth, fitting in and making new friends are Zola’s main goal. It’s what she wants. A family to call her owns. But then, Zola uncovers family lies and the true reason behind this never-ending war.

Now it’s up to Zola and the enemy, who is swiftly stealing her heart, to save her people and gain retribution for her family. But when revenge and protecting her people mean relinquishing her freedom, she’s left with a difficult choice.

I liked the plot of Zola Flash. While I have read other books with various takes on the same plot, this one did grab me and hold my attention. I don’t know what was different about this book but the plot grabbed me. There were some plotlines that did not need to be in the book. Like that Trevor plotline. It added nothing to the book, except to show that Zola was dating someone to make Pin jealous. Would I have connected better with the book if that whole plotline disappeared, maybe?

Instalove was huge in Zola Flash. I don’t know why YA books need to have the main female and main male character fall in love after a few days. They don’t know each other. It is safe to say I am not a fan of Instalove. In Pin and Zola’s case, Pin was her enemy. He was a Payohlini and she was a Victian. Those races were at war. They hate each other and the races do not mix. But Zola falls for Pin. I do think that she fell for him because of the trauma she endured at the beginning of the book.

I did like Zola. The author did a great job up until Zola arrived on Earth building up Zola’s character. Then she stopped. There was no more development until the end of the book. Zola became stunted. Her character was stuck in a never-ending loop of taunting Pin and being a brat. Zola did break out of that loop towards the end of the book but still.

Pin was almost too mysterious. Getting him to talk about himself was like pulling teeth. He kept vital information from Zola until almost too late. There were times where I wanted to bang my head off something hard because of that. There was a huge twist in his plotline that I didn’t see coming. I was shocked when certain facts were revealed. I also felt that he lead Zola on. I mean, you can’t kiss a girl and then friendzone her. Well, guardian zone her. No wonder she was confused about how he felt about her. I would have been too

The end of the book was explosive. There was a fight scene that had me on the edge of my seat. Also, Pin’s big secret comes out. That secret did shock me because it came out of left field. The book does end on a cliffhanger. I do not like cliffhangers in books. It is almost like the author ends the book mid-thought. Saying that the cliffhanger was not used like that in this book. The author ended the book but left enough unsaid to make me want to read book 2.

I said above that I felt disconnected from the book. I liked Zola but felt that her character had no development until the end of the book. I enjoyed the book but felt that there were plotlines that dragged the book down and took away from the story. I also felt that Zola’s past should have been revealed sooner. And there was Instalove.

I did love the story. I felt that it was well written with good world development. I liked Zola and Pin together. I thought that they had great chemistry. I also liked that Zola was a strong female. She overcame some serious trauma. She was not someone to mess with.

I would give Zola Flash a rating of Older Teen. It is a pretty clean book, language, and sex-wise. Zola and Pin kiss a few times but it goes no further than that. There is violence but the author did a good job of not getting too graphic with it.

I would recommend this book to family and friends. I would not reread it but would be open to reading other books by the author.

I would like to thank T. Marie Alexander for allowing me to read and review Zola Flash.

All opinions stated in this review of Zola Flash are mine.