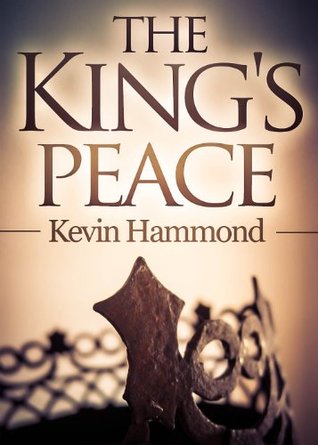 Where you can find The King’s Peace: Amazon | Barnes and Noble

The Kingdom is young and yet it stands in great peril. Dark tales of the unnatural have reached the King’s city. The King is slain in his bed and the storm on the horizon brings black ships closer to the coastal city of Erenon. Nathaniel, a clever thief has stumbled upon a job that brings him to the home of the King when he is slain and Nathaniel is unwillingly dragged into the quest to reach the southern garrison which has gone quiet in recent months. Strange powers are helping and hindering him and the small company of soldiers dispatched to that garrison as war comes to the city.
They will find those horrors that plague the common man, an ancient dragon legend will unravel, and deception so epic in scale it involves the Gods. The whole world of man and nations who live on the other side of the mountain range known as the Great Divide will come together in a war no one really understands and as the kingdom fights to survive it will face an enemy they know nothing about.

I enjoyed reading The King’s Peace. Sword and sorcery fantasies have always been a favorite of mine. I have read and reviewed a lot of historical/contemporary romances. I was getting burnt out from reading them. I don’t care how much you like a genre if you read too much of it after a while, all the stories start to look the same. The King’s Peace was a welcome change of pace.

The characters in The King’s Peace were 3D. I loved that once you thought you were getting to know a character another layer would appear. It is that type of character building that makes me want to continue reading a book. I also liked that all the characters weren’t truly good or evil. They, like in real life, fell into a gray area. Take, for instance, Nathaniel. He was a thief by trade but he ends up being the hero of the story. He wasn’t a hero by choice. He was a hero by circumstance and events. Or Richard. He was not a good guy. In fact, he was a douche about 90% of the book. Then he does something at the end of the book that twisted my perspective of him. It made me look at him and his actions differently.

Now, this book is not heavy on obvious magic. What do I mean by obvious? Well, there are no mages casting fireballs or warlocks summoning demons every chapter. The only “magic” per se in the first half of the book was the wizard who sold Nathaniel a not so invisible cloak and the zombies. Other than that, the magic lurked on the edges of the book. There were hints of evil magic woven into the story. That made it deliciously wonderful to me. There was no magic overload. For example, after the battalion went over the mountain, they were in a forest. One of the soldiers disappeared. Nathaniel and two other soldiers found him melded into a tree. Or the situation with the elves, the missing children, and Mother. Or the ratpeople. I could go on.

I thought that the plot of The King’s Peace was original. A young thief is forced to go with a battalion of soldiers to find out what happened to the southern garrison. Also, they need to find the King’s nephew because the King was killed and the nephew is the heir. There is danger on the quest to get there. Will they get to the southern garrison or will they die trying?

The end of The King’s Peace was spectacular. There was a spectacular fight scene. I was on pins and needles the entire scene because I couldn’t call who would win. While most of the storylines were ended, there were a couple that was not. That left enough for me to look forward to book 2!!

I would give The King’s Peace an Adult rating. I actually was going back and forth with myself about this rating. I was going to rate it an Older Teen rating but hesitated at it. The only thing that kept me from giving it that rating was the violence.

I would recommend The King’s Peace. If you like sword and sorcery fantasy or dark fantasy, then read this book. I would also recommend to family and friends but warn them about the violence.

I would like to thank Kevin Hammond for allowing me to read and review The King’s Peace.

All opinions stated in this review of The King’s Peace are mine.