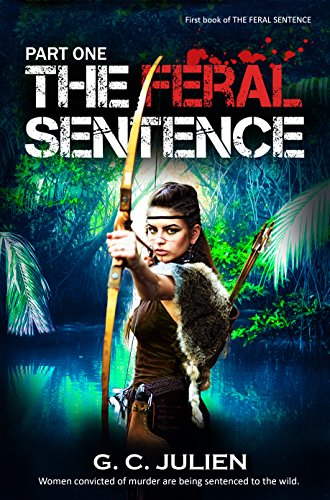 Where you can find The Feral Sentence: Amazon | Barnes, and Noble

The year is 2087, and the federal government has implemented a new sentence for criminal convictions—banishment to a remote island.

When Lydia Brone is wrongly convicted of murder, she is sentenced to three years on Kormace Island. She must forget all she’s ever heard about life in prison and develop the necessary skills to survive in the wild and defend herself against savage enemies—other felons who will fight for their rightful place within the island’s hierarchy system by means of violence and sheer brutality.

Set in 2087, The Feral Sentence follows Lydia as she struggles to survive on Kormace Island.  Kormace Island is the government’s controversial way of dealing with criminals. The government decided to put them on a remote island and let them fend for themselves. Lydia finds herself on the island after accidentally murdering her mother’s boyfriend. She soon finds out that surviving the colony on the island is the least of her worries. When a warring faction decimated the Village she calls home, Lydia needs to rise to the occasion and save her friends. Can she do it?

I liked Lydia but thought she was useless during the first few chapters of the book. Then I thought to myself, “Would I be able to survive” and sadly, the answer was “No“. I did think that she got a bum deal on the murder conviction. From her flashbacks, she shouldn’t have even been convicted of murder. But I digress. I also liked that while she knew nothing about survival, she caught on quick. She also learned about the pecking order in the village. I couldn’t understand why she was picked to be an Archer at first but the more I read, the more I started to understand.

The secondary characters were what made this book. Each character had her own personality. When they got talking about why they were on the island, some of their reasons were heartbreaking. I started to pity them when Murk revealed what something very shocking. I couldn’t even begin to image knowing what she and the other women knew. No wonder some of them were, well for lack of a better word, grumpy.

There are other convicts on the island that are in another group. That group attacks the Village often and kills as many people as possible. There is a vague explanation about who they are but it doesn’t go into depth about them. All that was said was that the leader challenged Murk and was removed with her followers. There are also references to ogres and wild animals that threaten the women in the Village.

The ending of the book was unexpected and bloody. It also ended on a cliffhanger. I can’t stand cliffhangers, as I stated above. But it worked with The Feral Sentence. I need to read the next book. I need to find out what happens to Lydia and her friends.

I would give The Feral Sentence an Adult rating. There are graphic violence and language. While sex is mentioned, there is no sex in the book. There is a kiss, that’s all. I would recommend to family and friends but would include a warning about the violence and language. This is a book that I would also reread.

I would like to thank G.C. Julien for allowing me to read and review The Feral Sentence