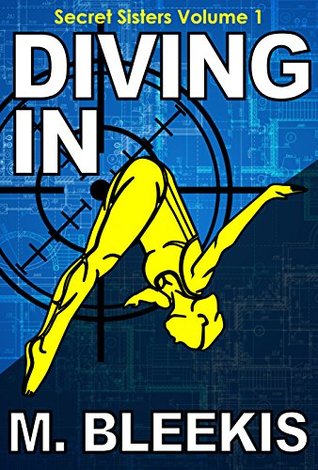 Where you can find Diving In: Amazon | Barnes and Noble

Ariel’s therapist thinks an all-girls boarding school will help the high school freshman banish her crippling anxiety. She immediately befriends suitemates Jess, Jan, and Mandy, but the school and its stylishly intimidating headmistress are harboring secrets. On her very first day, Ariel stumbles across one. What no-one at the Lily Academy appreciates is that this secret has links to organized crime and international espionage that will, within a very few days, put Ariel and her suite-mates in mortal danger. In the meantime, her secret sorority initiation ends in disaster, she develops a hopeless crush on Chad, a darkly handsome member of the school’s security staff, and another new friend unwittingly forces Ariel to confront her own personal demons. Will she be overwhelmed? Or, will she rise to these challenges? And what role will Dr. Vivian and her mysterious sisterhood play?

When I read the synopsis for Diving In, I was intrigued. Rarely you read about a teenager with crippling anxiety. These are situations that involve espionage and organized crime. I am glad that I read it. While I was expecting YA shenanigans, I was not expecting the espionage parts of the book to grip me the way that they did. Add a dash of mystery and I was glued to the book. A normal book takes me about a day, day and a half to finish. Diving In took me 4 hours.

Diving In is Ariel’s story. Ariel is a young woman who was recommended to a prestigious boarding school by her therapist. Suffering from anxiety, Ariel is hoping that the boarding school will be able to help her overcome it. Settling into the boarding school, she becomes friends with her suitemates. She is also picked for the much-coveted security job. But her peaceful, healing time at the school will soon be over. Can Ariel survive all the chaos?

I thought that Ariel’s anxiety was very well written. I also liked that while it was a major part of the book, it wasn’t always the main subject. The author had Ariel act like a normal teenager until she was confronted by her trigger. Which was the diving tower. Speaking of diving, I liked that Ariel was a diver. I haven’t read a book where the main character was a diver. Plenty of books where the main character was a swimmer but none about diving. I did feel bad when she relived the moment where her anxiety started.

Ariel’s friendships were also very important to the book. Her friends were her backbone when she was struggling with her anxiety. I loved seeing that but at the same time, I do wish that there was some friction between the girls. Some sort of minor fight, to liven things up. Other than that, I loved the friendships and the acceptance of Ariel’s anxiety among the girls.

Diving In was written in what I thought was a very interesting way. Instead of breaking the book into chapters, the author chose to break the book into smaller segments. Each segment had the name of the person featured. So, if you were reading about Ariel, it would be titled, Ariel. Mandy would be Mandy. Wombat would be Wombat and so on. While some people might not like this style of writing, I actually did. I found it easier to keep track of the characters and the storylines.

I liked the storylines in the chapter. The author did a great job of keeping the main two separate from each other until the middle of the book. The main two that I am talking about is Ariel and the organized crime stalking Mandy. There are several sub-storylines that feed into both Ariel and the organized crime storylines. Those got merged into both by the end of the book. What I loved is that while all the other storylines were resolved by the end of the book, Ariel’s wasn’t.

There is violence in Diving In. Not going to lie to you all and pretend that this book is all friendship bracelets and rainbows because it isn’t. There is a very graphic scene of murder/suicide. There is also a graphic and bloody attempted kidnapping scene. Scenes like that would not normally fit in with the Young Adult labeling but in this case, it did. Unfortunately, the violence is needed in this book to show how bad the bad guys were. Also to show how desperate those people were.

The end of Diving In was almost anticlimactic. Almost all the storylines were ended in such a way that I was very satisfied with them. But there were a couple of what I considered hints about what was going to come in the next book. Which I cannot wait to read!!!

I would suggest that Diving In be for Older Teens. While there is no language, there are several scenes of graphic violence. There is no sex but there is talk of erections and sexual desire. The sexual desire is both talked about during Ariel’s therapy sessions with Dr. Vivian and when she was dancing. Diving In is a book that I would read again. I also would recommend it to family and friends.

I would like to thank M. Bleekis for allowing me to read and review Diving In.

All opinions stated in this for Diving In are mine.