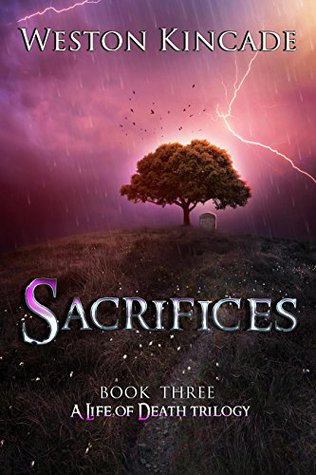 Series: A Life of Death

Where you can find Sacrifices: Amazon | Barnes and Noble

Alex’s ghostly visions can save lives. But can they stop a drug czar from disrupting the peace and harmony of Tranquil Heights?

Introduction by Scott Rhine, author of Jezebel’s Ladder
For Alex Drummond trouble doesn’t come knocking, it kicks down the door and raids the refrigerator. War is brewing between moonshiners and a murderous drug kingpin. Cremated human remains are appearing everywhere. And now Alex’s family is in the middle of it all. To make matters worse, his son’s powers rival his own… as does his stubborn nature. Choices will be made. Laws will be broken. And morality will be questioned. Will Alex’s family survive the bloodshed?

Psychometric powers combine in this thrilling battle for survival in Weston Kincade’s final book in the A Life of Death trilogy. The future of Alex’s hometown is at stake… but sacrifices must be made.

Sacrifices are one of those books that stick with you after you read it. It sticks to the same theme that runs through the other books in the trilogy but it also brings up a few questions. What would you do to protect your child? How far would you go to protect him or her? Would you be able to make a snap judgment under extreme stress and live with the consequences?

Sacrifices starts shortly after the events of The Golden Bulls. Alex is watching his town going down drain. There is a turf war brewing between the moonshiners and a drug kingpin. As that is happening, cremated remains are showing up all over town. Alex’s son is soon in the middle of things when he takes on a gang that is taking over the high school. Soon, everything will come to a head and what will happen when the smoke clears. Who will survive and who will die. Will Alex be able to protect the people closest to him? Will his powers help him?

If I only liked Alex in the earlier books, I loved him in this one. He was a force to be reckoned with. I loved it when he went clued the principal about gangs. He was a force to be reckoned with. I do like that he was a little jealous of Jamie’s power. He wasn’t salty about it but he was jealous that Jamie could talk to his father and he couldn’t. I thought that his reconnecting with his father’s friend was a pivotal part of the book. His friend gave some information that shocked Alex (and myself). As a parent myself, I know I would have done the same thing Alex did. Hands down and no questions asked.

The action in this book was awesome. It was the action (along with the supernatural elements) that kept me glued to the book. I like it when a book revs up and stays revved up. More often than not, books like this will stall in the middle of the book. Not Sacrifices. The action was kept up until the ending.

There is also violence in the book. Not going to lie and say that it was mild violence. There were some pretty gruesome scenes of murder. The most gruesome scene is with Hector at the end of the book. But, it didn’t take away from the book. Instead, it was needed to show how ruthless the drug kingpin and the moonshiners were.

The end of the book was almost a let down after the intense chapters before it. I felt a bit let down when reading the final chapter. The only reason I felt let down was that I knew there was not going to be any books in this universe. I would not know what happened to Paige, Alex or Jamie. There was no closure for me. And the final scene of the chapter…omg. I broke down in tears.

I would give Sacrifices an Adult rating. While there is no sex, there is language and graphic violence. This is a book and a series that I would reread. I would also recommend to family and friends with a warning about the violence.

I would like to thank Weston Kincade for allowing me to read and review Sacrifices and the A Life of Death trilogy.

All opinions stated in this review of Sacrifices are mine.

One thought on “Sacrifices (A Life of Death Trilogy: Book 3) by Weston Kincade”