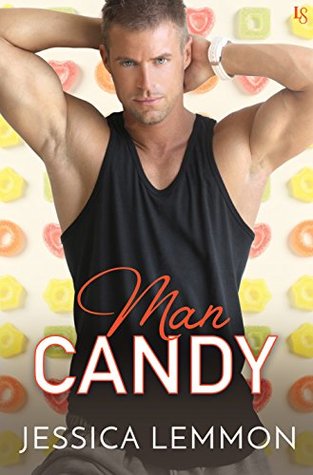 Where you can find Man Candy: Amazon | Barnes and Noble

Is there room for two in that sleeping bag? When it comes to love, a chiseled loner takes the scenic route in this irresistible standalone from the author of Eye Candy (“Truly the perfect romantic comedy.”—Lauren Layne).

Dax: After spending the summer buried up to my eyeballs in my family’s affairs, I’m ready for a break. The kind of break where I can spend two solid weeks camping and fishing in the company of absolutely no one. Then I find myself directly in the path of a drop-dead gorgeous tornado by the name of Becca Stone. Who can resist a night with a damsel in distress? Especially when she happens to be a leggy blonde? The last thing I expect is for Becca to show up on my cabin doorstep the next night, shivering in the rain and ready for seconds.

Becca: One minute I’m admiring the rock-hard jaw of the Magic Mike lookalike who walks into my bar, and the next I’m getting fired by my own brother. Loudly. In front of everyone. Luckily Dax Vaughn is a gentleman who aims his white-hot smile at me. Oh, it’s on. Wham, bam, thank you, ma’am. Then a torrential storm washes out the main road and causes a massive power outage, giving us two whole weeks to enjoy each other’s company. At which point Dax will go back home, leaving “us” in the rearview mirror. That’s the plan. Or it was . . . until I started falling for him.

With this holiday season kicking my behind, I have fallen behind on my TBR list.  I tend to read in the order that I got them but the beginning of November, that all went down the drain. I reorganized my TBR pile and started with books with reviews that were due yesterday and worked my way up. Man Candy, because of its publication date, was moved down the list. I ended up kicking myself because I put off reading a good book.

Man Candy is Dax’s book. Dax is the owner of McGreevy’s, the bar where the main characters worked or hung out at in the previous two books. Dax’s father had died and Dax was coming back from the funeral and helping his mother. Dax figured that he needed a vacation. He made reservations at a resort in the mountains of Tennessee. Unfortunately, when he showed up, it was raining. And this rain wasn’t ordinary rain. There were floods everywhere and people in the lower lying areas were being told to evacuate. It is at the Grand Lark that he met Becca, the owner’s sister. He actually walked in on Tad firing Becca for being late. Not that Becca listened. There were sparks between Dax and Becca from the get-go. What was supposed to be a one night stand turned into two nights, three nights and so on. What ends up happening is a typical romance novel. That didn’t ruin it for me because sometimes, you need that

I felt so bad for Dax. He was still grieving over his father’s death. So he decided to take a 2-week vacation. Hey, I would have done the same. He needed time to process his father’s death and grieve on his terms. He also needed time to plan his next move on the new bar he was opening. So a vacation in Tennessee was perfect. He wasn’t expecting to fall for Becca as fast as he did.

I loved Becca. I liked that she was so noncommittal towards things. She lived life to the fullest and didn’t know what the next day would bring. She wasn’t looking for a relationship when she met Dax. She didn’t do relationships. Only sex. Which was awesome. She made it very clear to Dax the first night they were together. Except it didn’t exactly end up that way. I also liked that she had a hidden talent and the author chose to make it a large part of the plot.

The sex between Dax and Becca was hot. Smoking hot. Scorching the pages hot. They were like bunnies after the first time they had sex. They did it everywhere.

Man Candy is told from an alternating 1st person perspective. You get the story from both Dax and Becca’s perspectives. I liked seeing how Dax saw Becca and how Becca saw Dax.

The end of Man Candy was a tear jerker. I cried along with Becca when Dax did what he did. I also did a fist pump when Becca agreed to what she agreed to. The epilogue, though, was awesome. I love reading about the characters after everything has ended with the main story.

Why: Language, Sex, and some mild violence

I would like to thank Loveswept, Random House Publishing Group, and NetGalley for allowing me to read and review Man Candy.

All opinions stated in Man Candy are mine