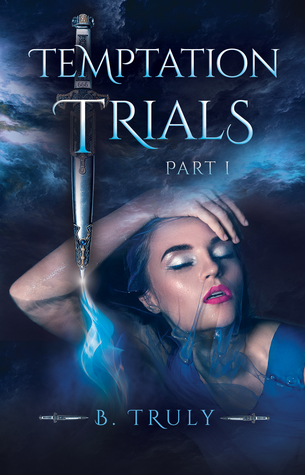 Where you can find Temptation Trials Part I: Amazon | Barnes and Noble

Part I of Temptation Trials

Will you be Tempted? Will Love save your Soul?

One nation under his reign.
Cardinal sins of man-caused humanity to pay the price. Cali Nasser grew up in a world succeeding World War III. The aftermath forced the world dictatorship that she must now live in. A new Regime arose from the ashes. They demanded obedience and cooperation from every citizen, even in matters of the heart.

One domain … One accord … One nation. In Cali’s eyes, the moral code revolves around a twisted plot for control.
It used to sicken Cali how people would allow the Regime to test their love through the Temptation Trials. That is until she met Kincade. Cali’s entire point of view changes when she falls for him. She struggles with herself, debating if she should challenge the government’s law of arranged marriage.

Cali’s childhood friend, Stefani, always kept a positive perspective about their lives until she was threatened with the same dilemma, at odds over the man she loves.

Now Cali and Stefani face a desperate choice—submit to the Regime’s will, or fight for what they value most—love. Although lust, mistaken for love, could lead to damnation. Do they give up on love or sign up for the Temptation Trials, a reality TV show where every temptation is laid before them?
The spirit is willing, but the flesh is weak. Can love save their souls?
Rated Mature 18 +
Adult, Dystopian Romance with sensuality, sexual content, and love triangles.

When I read the blurb for Temptation Trials, I had to grab this book. I enjoy reading dystopian and I enjoy reading romance. So I figured that I would like this book. And I did, up until Cali and Stephani went on the Temptation Trials with their boyfriends. I couldn’t get into the book after that. I felt that love triangle, and I can’t believe I am going to say this, sex took over the plot. And not in a good way.

The world is ruled by a dictatorship called the Regime. The Regime took over 16 years before when some sort of apocalyptic disaster happened. Life has been rebuilt under the Regime but it isn’t easy by any stretch. Stephani and Cali have only know the Regime. Both girls chafe at the restrictions placed on them. There is one source of entertainment, a TV show called Temptation Trials. That show lets people who are convinced that their SO’s are their soul mates go on and see if they are the one. They are separated and set up on dates with other men/women. Then they have to watch their SO’s go on dates. It is a source of embarrassment and entertainment for the people.

Stephani and Cali decide to apply for the show after falling in love with their boyfriends. They don’t want to be married off at 21 to someone they don’t know. Amazed that they both got picked, they hope that they both make it to the end of the show. Both girls are pretty sure that their boyfriends will stay faithful to them. But, what the girls didn’t expect was the instant attraction to Dom and Zion, two of the male contestants. they also realize that there is something pretty shady going on.

When I started reading the description of the book, it sounded very familiar to me. I couldn’t put my finger on it until I did a quick Google search. Then I remembered. Going to date myself here but there was a show in the early 2000s called Temptation Island. I watched the first two seasons and loved it. It had the same concept as the author’s fictional Temptation Trials. Except Temptation Island didn’t go to the extremes that Temptation Trials did.

I didn’t care about Stephani. She came across as immature and only out for herself. Being on that show didn’t raise my view of her either. I did feel bad when she dropped a bombshell towards the end of the book. Other than that, she rubbed me the wrong way. I don’t doubt that what she felt for Tobias was real but still…

I did like Cali and wished that the book focused more on her and her relationship with Kincade. I shouldn’t have been surprised when stuff happened with Zion but I was. I thought that she would have resisted. I did like that while she had conflicted feelings for Kincade and Zion, she was trying to work them out.

The sex was very hot in this book. I did think it was a little weird that the show chose to air all the girls’ sexual exploits. Even Cali and Stephani were shocked by that but realized it was for ratings. The hottest sex was between Dom and Stephani. I had to fan myself afterward. Cali’s came in a close second.

There was a twist in the plot that I saw coming. I also guessed what would happen after the girl (not saying who) gets the information. There is a smaller plot twist that did surprise me and I am wondering how that is going to pan out in book 2.

The book ends on a cliffhanger. I hate cliffhangers and this one was no exception. It ended and I was like “Grrrr“. I did find that there were plotlines that were dropped and were not addressed again in the book. Which drives me nuts. I do want to read book 2. I need to find out what happens next.

Temptation Trials Part 1 was a good read. I did not like one of the main characters and felt that the plot lagged towards the middle of the book. I did like the plot but felt it followed an early 2000’s reality TV show too closely. While I didn’t like the main characters, I did like them and felt that they were portrayed in a realistic way. The book ends on a cliffhanger, which I did not like. I would recommend to people but warn about the above issues.

I would like to thank Createspace Independent Publishing Platform, Independent Book Publishers Association, Members Titles, and NetGalley for allowing me to read and review Temptation Trials Part 1