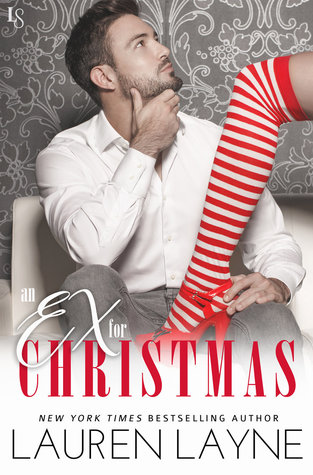 An Ex for Christmas – Book 5

Where you can find An Ex for Christmas: Amazon | Barnes and Noble

She’s making a list—and checking it twice. But is there a nice guy among all her naughty exes? The New York Times bestselling author of Blurred Lines returns with a charming friends-to-lovers rom-com.

When a psychic tells spunky, superstitious Kelly Byrne that she’s already met her true love, she becomes obsessed with the idea of tracking him down before Christmas. Kelly immediately writes up an “Ex List” and starts contacting old boyfriends to figure out which one is the one. When her college sweetheart rolls into town, Kelly convinces herself that they’re meant to be. The trouble is, sparks are flying with someone she’s never given a chance: her best friend, Mark.

Mark Blakely has watched the guys on Kelly’s list break her heart, and he’s not looking forward to watching them do it all over again. Mark’s always been there for her, but the timing’s never worked out for their relationship to be something more. Now, just as Mark is ready to move on, the sexual tension between them is suddenly off the charts. With Christmas morning around the corner, he just hopes Kelly will wake up and realize that everything she wants has been right in front of her all along.

There are two reasons why I requested this book from NetGalley. One is that I have read Lauren Layne’s books in the past and loved them. The other reason is the cover. I looked at it and got a huge smile on my face. It captures the book’s Christmas spirit and silliness (yes, silliness). Then I read the blurb and I had to read An Ex for Christmas. I am glad that I did because I laughed my butt off. Kelly and her misadventures had me rolling.

Kelly is a teacher in New York City who is coming home for the holidays. As an anniversary gift to her parents, she is sending them on an Alaskan cruise over Christmas. Doing that, this will be the first Christmas that she has celebrated alone. Well, not alone. Her best friend, Mark, lives behind her parents and she has plans to spend it with him. On her way to the train station, she rules into a woman who tells her that she has already met her true love. So, what does Kelly do? She makes a list of her ex-boyfriends and proceeds to track them down. What happens while she does that is pure gold. She comes to realize that her true love wasn’t an ex but someone who had been there for her through everything. Someone that she kept pushing to the side. Someone who has finally had enough and has to let her go to go on with his life.

I loved Kelly. She was a very original person. She read horoscopes and believed that astrology could tell compatibility between people. She consulted her magic 8 ball for everything. She believed in psychics. When the psychic told her that she found her true love and would be with him over Christmas, Kelly was very excited. What does she do? She makes a list of all her ex’s and weeds out the ones that are married or in relationships. That leaves her a manageable list to work with. She then proceeds to get in touch with each one of them….with Mark in tow.

I couldn’t hold back my laughs when she would go on the date with the guy and then write what was wrong. One guy actually accepted her invite to blast her. Another one made off-color comments about how she gained weight (that wasn’t funny). She started to realize that her past relationships were not what she thought they were. While I got a laugh out of those misadventures, I liked how she learned from them. She saw those guys how the other people in her life saw them. It was eye-opening for her.

I did like Mark but I felt that he got what he deserved. If he had been more honest with Kelly, then maybe he wouldn’t have been shunted off to the side every time she got a boyfriend. Now saying that he didn’t let the grass grow under him. Nope. He had relationships and was sexually active. I mean, look at what Kelly walked into when she let herself into his house. I loved how he came clean to her about his feelings. It was awesome to see a male fictional character be raw like that. He let her see how much she was and had hurt him. Then walked away. He couldn’t deal with it anymore.

I loved that the author held off on Mark and Kelly having sex until the last half of the book. By then, Kelly was questioning what she felt for Mark. I betcha Mark thought Christmas came early. The woman he has loved for 10 years is allowing him to have sex with her. Yup, it must have been like Christmas. Anyways, those sex scenes were hot. Even hotter now that I know how Mark felt about Kelly.

The end of the book made me cry. Like I said in the above paragraph, it was told from Mark’s view and you got to see Kelly through his eyes. It was very romantic. I am hoping that there will be a book 6 and that Mark and Kelly make an appearance in that book.

An Ex for Christmas is a fun quick read. I had some good laughs reading this book. I also had a couple of good cries. So read with tissues nearby. The characters were lovable. The plot was good. I will recommend this book to anyone who wants to read it.

I would like to thank Random House Publishing Group, Loveswept, and NetGalley for allowing me to read and review An Ex for Christmas