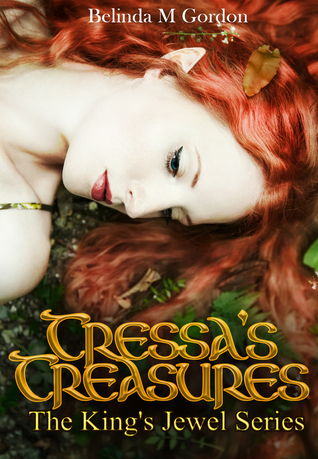 Where you can find Tressa’s Treasures: Amazon | Barnes and Noble

Her identity is secret. Her destiny is incredible.

Tressa is a fae in hiding. Unable to fulfill her transcendent role in an ancient prophecy, she hides on her grandmother’s estate in the Pocono Mountains. Tressa is content to work in her small shop and fake her humanity, but she knew she couldn’t stay hidden forever.

When she uses her powers to protect a friend, strange things begin to happen all around her. The Unseelie are nearby, the enemy of Tressa’s people, and they’re coming for her. As the dark fae come closer, Tressa must use the powers she’s hidden for so long to keep the people she loves alive.

Tressa’s Treasures is the first book in a fantasy series based on Celtic mythology with a twist. If you like engaging plots, grownup love stories, and twists and turns, then you’ll love Belinda Gordon’s unique twist on faerykind.

Growing up, I was very much into faeries. I loved the delicate wings and how they were portrayed in the stories. As I got older, I started looking into the myth behind the faeries and what I read fascinated me. The more I read, the more in love with the myth’s I became. I am now much older and still like faeries. Not obsessed like I used to be but I enjoy reading about them. When I was approached to review Tressa’s Treasures, I immediately agreed. The blurb had me going “Hrmmmm“. I am glad that I agreed to review this book because I enjoyed it.

The plot of Tressa’s Treasures is pretty straightforward. Tressa is a Sidhe princess who is in hiding. She is in hiding because she is the King’s Jewel. The King’s Jewel is a nickname given to the youngest child of the king. Tressa was the youngest child of the youngest child. According to the prophecy, Tressa will be the mother of the Sidhe who will bring the Sidhe together as a race. Her people, the Seelie Court, believes that she will fulfill the prophecy. The Unseelie Court also believes but they do not want the prophecy to be fulfilled. So, they track down and try to kill every single King’s Jewel, especially the female ones. Because of that, Tressa is in hiding. She lives on the estate of her grandmother, the Queen Mother. She dares not to use her magic or even talk about the Sidhe. Because the wind will carry her words to the Unseelie and her hiding spot will be blown.

When Tressa’s friend is attacked in her store by her abusive husband. Tressa is forced to use magic to compel him to leave the store and never come back. Unfortunately, there are witnesses to her doing that. One of the witnesses is an attractive man and his daughter. Thinking she will never see them again, Tressa is surprised when that man comes to dinner. The man, Alexander, is a geologist who is going to stay at the guest house while he is in town.

From there on, Tressa has to keep her presence hidden from the Unseelie Court. She also has to fight her attraction to Alexander. She also tries to protect Holly from her abusive husband. Things will come to a head. There will be a betrayal, a death, and a kidnapping. In the center of it all, Tressa stands.

I loved Tressa. She was so strong. I mean, if I was being hunted by people who wanted to kill me because of a prophecy, I would have had a mental breakdown. Not her. I admired that about her. When she was tired of running, she stood her ground. I also liked how she stood up for her friend, Holly. She offered a safe harbor for Holly when her husband would beat her. She was the only one in that town who voiced her disgust over the way Holly was being treated. She was a good friend in so many ways. If she wasn’t a fictional character, I could see myself being good friends with her.

Tressa’s relationship with Alexander was….different. She was very much attracted to him but didn’t want to give into that attraction. She kept him at arm’s length until she healed him. Then he was able to see her true self. I enjoyed reading the evolution of their relationship.

I also enjoyed reading her relationship with Alexander’s daughter, Sophia. The Sidhe cherished children and you could see the love that all the Sidhe had for her. But Tressa came to love her as a parent.

I enjoyed the religious undertones of this book. The Christianity angle of the book was not shoved down your throat. It was mentioned and it was very much there but it wasn’t forced. If that makes sense. I thought that the angel angle (say that three times fast) was fascinating. I wouldn’t have thought to put faery and angles together.

Of course, Alexander and Tressa have sex. They have lots of it. The sex scenes were fantastic. They were not descriptive sex scenes but they were hot. Sometimes, all you need is a little imagination!!

The end of Tressa’s Treasures was the saddest one that I have ever read. I was ugly crying. I was glad it ended where it did because there was no way I could have processed anything beyond that point. The end of the book left an opening for book 2.

Tressa’s Treasures was a fantastic book for me to read. I loved reading about the Sidhe. I thought the Christianity angle was a different approach to that myth. The plot was engaging and original. The characters were fleshed out. This is a book that I enjoyed reading and I will recommend.

Why: Violence, language, and sex.

I would like to thank Belinda M. Gordon for allowing me to read and review Tressa’s Treasures