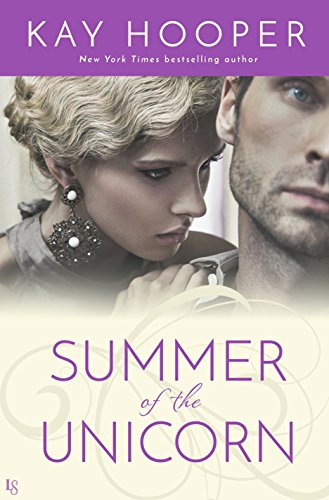 Where you can find Summer of the Unicorn: Barnes and Noble | Amazon

SHE WAS BORN OF MYTH … BUT THEY LOVED AS MORTALS

They were of two different worlds and during one fateful summer, those worlds would converge in a spectacular mountain valley. Siri, warrior, sorceress and siren, the gorgeous Keeper of the last herd of golden unicorns. And Hunter Morgan, myth-seeker, whose ordained quest has led him to this strange place and to Siri. She is woman incarnate, whose purity is akin to her life. He is man personified, whose needs run deep. They were born to be lovers, to come together at this time of enchantment to solve the riddle of their doom–each other’s touch–and to fight alone and together against a powerful foe whose evil menace threatened them … and their worlds.

I was pretty excited when I saw Summer of the Unicorn on NetGalley. It was a romance and it had unicorns. Plus, I had liked the Kay Hooper books that I have reviewed. While I liked this one, I thought that it fell a little short of being a book that I loved.

Hunter and Boran are heirs to the throne on their home planet. When their father died,  the throne had to go to one of them. But the council was split on who should be King. So, they send Hunter and Boran on a quest. The quest: To find the unicorns and somehow bring proof that they are real. The first one to bring back proof will be King.

Both men find the planet that the unicorns are on and the mountain range where they live. Hunter discovers that they come to the valley once every 10 years to foal. They are also under the protection of a woman Keeper. For over 10,000 years, the Keeper has protected the unicorns and will kill to keep them safe. On a scouting mission up the mountain, Hunter spies on the unicorns and the Keeper. Unfortunately, he falls off the cliff he was on and almost dies. Hunter is soon drawn into the Keeper’s fight to keep the unicorns alive. When the battles become personal, Hunter is forced to make a choice. That choice will affect the unicorns, the Keeper and himself in ways that he couldn’t even imagine.

Siri is the Keeper and she was pretty intense. First off, I had to giggle at the name. Now, I know this book was written before the invention of iPhones but I couldn’t help but laugh. Bad I know. Anyways, she was a stress ball. Not that I blamed her. I also didn’t blame her for her reaction to Hunter. What rubbed me the wrong way was how easy it was for Boran to get Siri under control and what he did to her.

I thought Hunter was a tool when I started reading the book. I soon realized that he was just a very spoiled prince trying to complete an impossible quest. I couldn’t figure out how he was going to get proof that there are unicorns. Then he falls off the mountain. I did a facepalm when that happened. I also couldn’t understand his nativity around Boran. It was pretty obvious from the first interactions that Boran hated him. How could Hunter not see that or know? He did get better as the book went on. He did help Siri defend the unicorns against Boran and the Huntsmen. But my original thoughts on him colored the whole book.

Boran was the evilest person I have read. He was very refreshing from other villains in books that I have read. He did not hide his thoughts about Hunter. Which is why it baffled me that Hunter could not see that Boran hated him. As for Siri, I do think that he started off intending to rape her and kill the unicorns. But then, he fell in love with her along the way. Of course, his love was twisted and stalkerish but it was love to him. I was not expecting the twist in the plot about him. I did feel bad for Hunter when that happened.

I liked that the author kept Hunter and Siri from having sex until almost the end of the book. That kept the sexual tension at a peak from the time Hunter arrived in the valley until they did the dirty. I don’t count what she did with Boran. She was compelled and had no clue what she was doing. It was like rape in my eyes. When Hunter and Siri did have sex, it was hot.

The end of Summer of the Unicorn was pretty standard except that there were a couple of twists in the plot. One twist I saw coming. But the other one, yeah, didn’t see that one coming.

Summer of the Unicorn was an interesting read but it failed to hold my attention to the book. The plot was interesting but it did lag in spots. The male main characters came across as either tools or evil sex maniacs. I did like the female main character but felt that she was too innocent for the male main. I would read this again but I don’t know if I would recommend to anyone.

Why: Sexual situations, mild violence. There are a couple of scenes where Siri has sexual acts performed on her while under a compulsion.

I would like to thank Random House Publishing Group, Loveswept, and NetGalley for allowing me to read and review Summer of the Unicorn.

All opinions stated in this review of Summer of the Unicorn are mine.