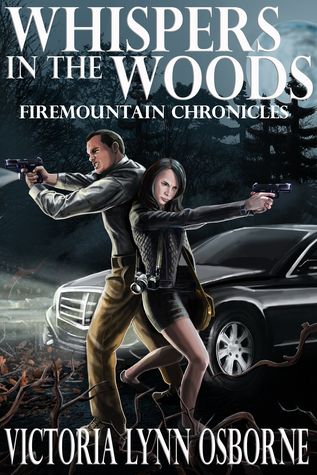 Whispers in the Woods – Book 1

Where you can find Whispers in the Woods: Amazon| Barnes and Noble

Dinah Steele was starting her career as part of a presidential candidates press corps when her team made a campaign stop in Tacoma Washington. Ever since then she has been seeing strange creatures in the shadows.
Drawn by a growing obsession to find answers to her visions, her journey takes her to Firemountain. She is drawn into the strange city. With the help of a privileged heir, she investigates the death of her predecessor and uncovers a plot spearheaded by a demon lord that seeks to conquer the city and take over the gate that has opened in the nearby volcano.

When I read the blurb of Whispers in the Woods, my attention was caught. For the past month, I have reviewed romance/young adult or a combination of such and I was getting bored. So this book grabbed my attention. It was the combination of fantasy and modern-day that drew my attention to the book. I am glad that I accepted the review invite because I enjoyed reading this book.

The plot of Whispers in the Woods was very original. A woman starts seeing things after a campaign stop in Tacoma, Washington. She was part of the press that follows the candidates. She thinks that she is going insane. An encounter with another reporter makes her rethink what is happening to her. The reporter keeps telling her to go to a place called Firemountain. That they will be able to help her understand why she is having the visions. After the campaign, she finds out that he has died. It is then that she gets a job offer from the Firemountain local paper….offering her a job. Which she takes.

There is also a secondary plotline that consists of a cult that is trying to free a demon into this world. This cult is responsible for a jailbreak from a psychiatric hospital. That psychiatric hospital holds that areas most evil, vile serial killers. The women and the heir have to battle them in to find out what happened to Caedon.

Dinah Steele was an amazing character, in my eyes. She lived up to her surname. She was tough. I know that if that was me, seeing everything that she saw, that I would be a lunatic. She did have her moment mid-book, not that I blamed her. But she rallied. She learned how to use her abilities to help with her investigation. She also used them to help with the secondary plotline with the cult and the serial killers.

I am going to admit it, I thought that Jake was a tool. He didn’t exactly have the best introduction to the book. I mean, he picked up two girls in a bar, had a threesome with them and then decided, “Hey, I’ll take them to Firemountain with me“. Then watches as cultists kill them at an abandoned gas station. Actually, he saw one girl killed. Not the other. Not that he stuck around. He took off…like any sane person would have done. But, the more into the book I got, the more I got to understand his character. And the more I started to like him. He was willing to help Dinah with her story and protected her when things got very hairy.

I will let you all know, if you do not like blood, guts and somewhat gory murder scenes, skip this book. I did not have an issue with it and I did think that all the murder went with the plotline. I mean, there are demons, insane serial killer, and cultists. How could you not write this book without any of that?

The end of Whispers in the Woods was insane. I was not expecting Dinah and Jake to go where they were going. The battle between them and the cultist, yes, I was expecting. But not what happened after. I did like that not all the plotlines were wrapped up. There were still some plotlines that were left open. That left it wide open for book 2. Which I am super excited to read.

Whispers in the Woods was a very fast paced book that I enjoyed reading. This book might be for those who don’t like violence or graphic murder scenes. The characters were likable. The plotline was well written and engaging. This is a book that I will definitely be reading again.

Will I recommend to family and friends: Yes but with a warning about the violence/graphic murder scenes

I would like to thank Victoria Lynn Osborne and Azure Spider Publications for allowing me to read and review Whispers in the Woods.

All opinions expressed in Whispers in the Woods are mine.

One thought on “Whispers in the Woods (Firemountain Chronicles: Book 1) by Victoria Lynn Osborne”