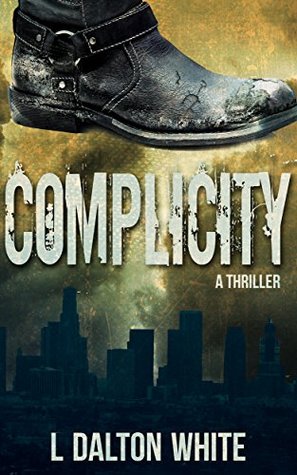 I very rarely have had a book strike a never with me as Complicity did. This book stayed with me for a long time after reading it. The author did not gloss over anything in this book. And stress anything. That is what made Complicity such a good read for me. I also liked that this showed exactly what outlaw MC’s are like.

The main plot of Complicity is rather simple. Natalie is determined to find out what happened to her boyfriend’s father, Pete. Pete had disappeared while hitchhiking across the country. The more Natalie searched, the more she realized that Pete has gotten himself into some deep trouble.  The closer she gets to finding out about happened to Pete, the more danger she is in. Will Natalie find out what happened to Pete? Will she come out of this journey alive?

While I liked Natalie, I did think she made some dumb decisions. Starting with Bart, they went downhill. I did admire her determination to find Pete. She wanted to do it so Bobby, Pete’s son, could have some closure. There is no way that I would have kept on looking if someone came up to me and threatened me. Nope, I would have been on the next flight home. But, I did admire her determination. She let nothing get in her way to find out what happened to Pete. Even if it did almost kill her.

Pete was a good guy but man, did he get himself in some trouble. He liberated Morrison from the motorcycle club run brothel/strip club. He didn’t understand the trouble he was getting himself into at first. I did like that the author kept the details about Pete’s journey very sparse. He kept Pete’s disappearance a mystery and that is what drew me to the story.

I will send out a warning that there is a ton of violence in this book. So, if you don’t like violence, this wouldn’t be a book for you. I have said in other reviews, the violence is almost needed in this book. It drives home how bad this motorcycle club is. It also drives home what they could and would do to get their “goods”, aka Morrison, back.

I also liked that the author touched upon sex trafficking in this book. It is a very real thing that is happening in this country. Unfortunately, most people seem unaware of it and tend to ignore it. As is the drug epidemic. As the sister of an addict,  I sympathized with both Morrison and Natalie. Morrison because I know how hard it is for addicts to overcome their addiction. I sympathized with Natalie because addicts cannot be trusted when they are looking for a fix.

The end of the book was fast-paced. There was so much going on that my head was spinning at times. The storylines were ended in a way that satisfied me as a reader.

Complicity is a fast-paced suspense-filled book. The plot was engaging and will keep your attention on the book. The characters were diverse. This is a book that I would read again.

I would like to thank L. Dalton White and Vernacular Press for allowing me to read and review Complicity.

All opinions stated in this review of Complicity are mine