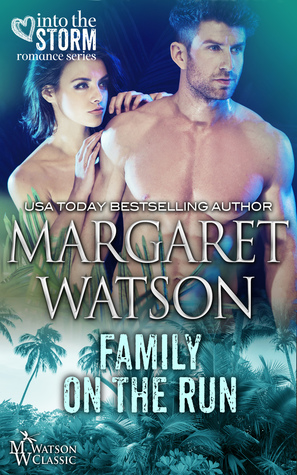 The Dark Side of the Moon – Book 4 (review here)

Where you can find Family and the Run: Barnes and Noble | Amazon

For three years, Andi McGinnis had haunted Chase Remington’s dreams. She was the one woman in the world he would never trust – or ever forget. Now she was back, as infuriatingly brazen – and alluring – as ever. But this time, he vowed their mission was all that could exist between them…

Driven by revenge, Andi had dreamed of the day she would meet Chase again. Now that she had, an innocent child’s life depended on her ability to pose as his loving wife. Together, the undercover agents set out through the perilous South American jungle to deliver the orphaned baby to safety, bound by their common cause – and tortured by a passion that refused to die…

I was a little sad when I started reading Family on the Run. I had gotten into the Into the Storm series and I got attached to all the characters. I was excited to read Family on the Run because it was Chase’s story. I had been curious about him from To Save His Child and I wondered who he would be paired up with.

The plot of Family on the Run was one that kept me on the edge of my seat. I was taken back to the country of San Marcos, where this series started. Chase is sent there to extract an informant and her child. She had important information about the dictator, El Diablo, who ruled the country. Instead, he is met by his ex-teammate/love interest, Andrea. He is told that Paloma, the informant, is dead and has left behind a 4-month-old baby that Andrea has cared for. El Diablo is after the baby, determined to kill him. Andrea is determined to reach the capital city and get to the safety of the local CIA headquarters. Unfortunately, El Diablo’s men get there before they could escape. That leaves their only route of escape through the jungle. Will they make it? Will they find out who the mole is at the CIA headquarters? Will El Diablo get caught and brought to trial for his crimes against the people of his country? Read the book!!

I liked Andrea but man, was she under a ton of stress. She was thrust into motherhood when Paloma was killed. She also was trying to bring down El Diablo….for some very personal and sad reasons. On top of that, she had intense feelings of guilt for her role in the death of her and Chase’s teammate. And she was also fighting her attraction for Chase. I was surprised that she didn’t crack. I also thought that her stress level would go down once they reached the capital city of Monterez. It didn’t. Actually, her stress level didn’t go away until the end of the book. I felt bad because I wouldn’t have been able to work under that level of stress.

I loved Chase. He was so conflicted about his feelings for Andrea until about the middle of the book. He blamed her for the death of their teammate and hated her for it. But at the same time, he was attracted to her. I liked how he worked through his feelings for Andrea and forgave her. I also like he was an Alpha but not overwhelmingly so. He gave Andrea her space when needed, supported her when she needed it and worked with her. I also loved that he had such a strong bond with Paolo.

I loved the sex scenes but I did get a little grossed out by the ones in the jungle. All I could think of was “bugs“. Considering that jungles have bugs that like to lay their eggs under human skin, it did gross me out. Once they got to the capital and had a bed, the sex became hot for me.

I liked the end of Family on the Run. It was a little anticlimactic but it ended well. All the plotlines were ended in a way that satisfied me as a reader. I loved the epilogue!!!

Family on the Run is a fast-paced romance that kept me glued to the book. I grew to care about the characters. This is a book, and a series, that I will read again.

I would like to thank Margaret Watson and Dragonfly Press for allowing me to read and review Family on the Run.

All opinions stated in this review of Family on the Run are mine.

One thought on “Family on the Run (Into the Storm: Book 5) by Margaret Watson”