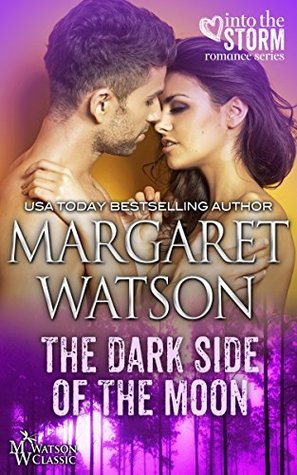 Where you can find The Dark Side of the Moon: Amazon | Barnes and Noble

Disturbing things are happening in the small town of Eagle Ridge. Veterinarian Tory Holt had come here seeking sanctuary after her life in Chicago fell apart. But the violence she’d escaped has followed her to northern Wisconsin. A serial killer is preying on single women, and Police Chief Holt Adams has appointed himself Tory’s keeper.

Although Tory is drawn to Holt, she realizes he’s hiding secrets. As the violence escalates in Eagle Ridge and Tory and Holt grow closer, Tory is forced to make a decision. Can she trust Holt? Or will she pay the ultimate price for her trust?

I was in the mood for a suspense romance when I started reading The Dark Side of the Moon. I have been on a YA/romance/paranormal kick for the past month. So reading this book was a break for me. I was looking forward to reading it.

I enjoyed the plot for The Dark Side of the Moon. A woman moves to a remote area to rebuild her life after a devastating attack. But soon after she moves, murders happen. There is a serial killer preying on single women who were isolated. The local sheriff, determined to protect her, sits at her house. As they get to know each other, the serial killer is moving into her. It was pretty basic but made for a very good read.

I liked Tory even though I felt awful for her. If I was in the same situation, being a victim of police brutality, I don’t know if I could function. So I thought she was very brave for wanting to start her life over again. I also thought she was brave to trust Holt when she feared him. I was mentally screaming at her to go into town with Holt, though. But I understood why she didn’t do it. Her patients came first. First the German Shepherd and then the mutt that Holt found in the forest.

Don’t even get me started on Holt. He had that tall, dark and handsome persona down pat. I was a little creeped out by him, in the beginning. He would show up at Tory’s house, unannounced. He would sit outside her house in his car and watch her. He even phoned his friend, Luke from An Honorable Man, to find out what happened to her. But, when it was revealed what happened to his wife, I understood why he felt he had to be on top of Tory. I would have done the same thing.

The author did a great job at keeping who the killer was until almost the end of the book. She threw a few red herrings out that made it look like another person was the killer. I also liked that Holt knew who the killer was but Tory didn’t. It made for a more explosive ending.

The paranormal aspect, I wasn’t expecting. It was there from the beginning but I didn’t see it as such. It wasn’t until later in the book that Tory realizes that she somehow has a connection to the killer. When the killer was revealed, he did give an explanation about their connection. While it didn’t make sense to me in the book, it makes sense to me now that I have had time to reflect on it. It upped the creepiness factor too.

The sex scenes between Holt and Tory were hot. I loved the sexual tension between them. But what I liked is that Holt held off doing anything until Tory felt comfortable with him. Then they were like bunnies, doing it everywhere. Of course, there were bumps but the bumps were overcome by one huge thing: COMMUNICATION. These characters actually talked about what was bothering them.

The end of the book was explosive and I loved it. All the plotlines were ended in a way that satisfied me as a reader. I also loved the epilogue. Talk about the ultimate happy ending!!

The Dark Side of The Moon is a fast-paced electric suspense with more than a dash of romance thrown in. The characters were well written. The plot was great. This is a book that I will read again.

I would like to thank Margaret Watson and Dragonfly Press for allowing me to read and review The Dark Side of the Moon.

All opinions stated in this review of The Dark Side of the Moon are mine.

2 thoughts on “The Dark Side of the Moon (Into the Storm: Book 4) by Margaret Watson”