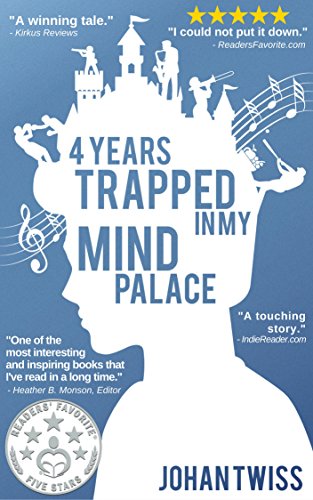 Where you can find 4 Years Trapped In My Mind Palace: Amazon

Diagnosed with a rare form of meningitis, fourteen-year-old Aaron Greenburg is paralyzed from head to toe. Doctors believe he is essentially brain dead and unaware of his surroundings, but Aaron is very much aware—trapped in his own mind with no way to communicate.

To cope with his imprisonment, he retreats to an imaginary world called his Mind Palace, but the lines between reality, and time itself, start to blur when he receives a new patient as a roommate—an old, outspoken, Jewish jazz musician, named Solomon.

Filled with witty humor and heart-warming experiences, 4 Years Trapped in My Mind Palace is a coming-of-age story, entwined with an end-of-age story, that will capture your imagination with a hint of nostalgia, a hint of the whimsical unknown, and a wild adventure through modern history.

I was not expecting the range of emotion that I had when I started reading 4 Years Trapped in My Mind Palace. I went from laughter to tears back to laughter within the same chapter. I enjoy it when a book makes me feel that range of emotion. What I also liked about this book was that it was tween/teen friendly. I have read and reviewed a few YA books that have made me question if they should be in that category.

4 Years in My Mind Palace has a very simple plot. Aaron has been paralyzed from head to toe from a rare form of meningitis. He has no way to communicate and the Drs’ are convinced that he is brain-dead. Which is the opposite. Aaron is very aware of his surroundings. He is very frustrated that he can’t communicate with his parents, Drs or nurses. His only source of entertainment is old reruns of Sesame Street that a well-meaning nurse puts on for him. Other than that, he is stuck looking at the same area day in and day out. He deals with the mind-numbing boredom by creating an imaginary world in his head. He calls that imaginary world his Mind Palace. That is the only thing that keeps him from going nuts.

Then, one day, he gains a roommate named Solomon. Solomon is a very outspoken jazz musician who has dementia. Aaron forms a bond with Solomon when it comes out that Solomon can talk to Aaron through his Mind Palace. With Solomon’s help, Aaron starts to recover. He stuns his Drs by proving them wrong. Aaron also discovers that he can be pulled into Solomon’s dementia episodes.

I connected with Aaron. He went through so much and he had so a great outlook on life. I also loved his snarky remarks about everyone. Even before Solomon became his voice. They were great. I did feel bad that his parents disappeared for a large part of the book. I did get why they disappeared but still. I also could understand his anger at his father. I would have had the same anger towards mine if he said what Aaron’s father said when he thought he was brain-dead.

I loved Solomon. He was a flipping riot. I was laughing my butt off during most of his scenes. But as the book went on and his dementia got worse, I felt so bad. By the end of the book, I was in tears. Solomon seemed so diminished from his larger than life self. I wanted to say “But it isn’t fair” at the end of the book.

When a book goes from the past to the present, it bothers me. I feel that I can’t keep up with the characters. Luckily, in 4 Years in My Mind Palace didn’t bother me. I think it was because Aaron was still the same. Regardless if he was in Solomon’s memories or not.

I did like that the author made Aaron have somewhat of a romantic connection with Solomon’s granddaughter. It was cute. I smiled throughout their interactions.

The ending was a real tear-jerker. While I knew what happened was going to happen, I was not ready for it to happen. If that makes sense. I do think the way that it happened to fit in with the story very well. I wasn’t ready for it.

4 Years in My Mind Palace is a wonderfully written young adult fantasy that will make you laugh and cry. This book has characters that will come to life. The plot was well written. This is a book that I would feel very comfortable with my 12-year-old reading.

Why: Very clean book. Does have some mild violence but nothing graphic.

I would like to thank Johan Twiss and Twiss Publishing for allowing me to read and review 4 Years in My Mind Palace.

All opinions stated in the review of 4 Years in My Mind Palace are mine.