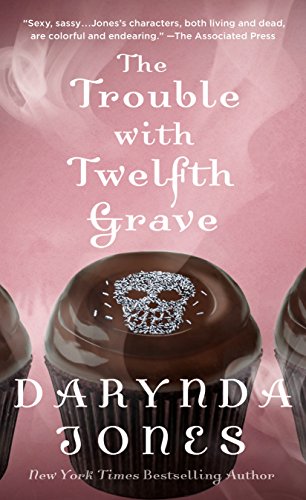 Second Grave on the Left – Book 2

Fourth Grave Beneath My Feet – Book 4

Fifth Grave Past the Light – Book 5

Sixth Grave on the Edge – Book 6

Seventh Grave and No Body – Book 7

The Dirt on Ninth Grave – Book 9

The Curse of Tenth Grave – Book 10

The Trouble with Twelfth Grave – Book 12

Where you can find The Trouble with Twelfth Grave: Barnes and Noble | Amazon

Ever since Reyes escaped from a hell dimension in which Charley accidentally trapped him, the son of Satan has been brimstone-bent on destroying the world his heavenly Brother created. His volatile tendencies have put Charley in a bit of a pickle. But that’s not the only briny vegetable on her plate. While trying to domesticate the feral being that used to be her husband, she also has to deal with her everyday life of annoying all manner of beings—some corporeal, some not so much—as she struggles to right the wrongs of society. Only this time she’s not uncovering a murder. This time she’s covering one up.

Add to that her new occupation of keeping a startup PI venture—the indomitable mystery-solving team of Amber Kowalski and Quentin Rutherford—out of trouble and dealing with the Vatican’s inquiries into her beloved daughter, and Charley is on the brink of throwing in the towel and becoming a professional shopper. Or possibly a live mannequin. But when someone starts attacking humans who are sensitive to the supernatural world, Charley knows it’s time to let loose her razor-sharp claws. Then again, her number one suspect is the dark entity she’s loved for centuries. So the question becomes, can she tame the unruly beast before it destroys everything she’s worked so hard to protect?

So I did a very silly thing with this series. I read First Grave on the Right and then jumped right to The Trouble with Twelfth Grave. I skipped every single book between. So, yeah, I was a teeny-weeny bit confused while reading The Trouble with Twelfth Grave. I didn’t let my confusion get in the way of reading the book. It was the new relationships/new people who threw me off.

The Trouble with Twelfth Grave starts with Charley unloading her problems on a ghost. Long story short, she sent Reyes into a hell dimension. Reyes was supposed to save some innocent people who were trapped inside. Only thing….she accidentally trapped him inside the god glass pendant. He was trapped with an evil priest, a demon assassin and a malevolent deity. Reyes changed when trapped in that dimension. He reverted back to his deity form. And that deity form hates human. He also hates Charley because Charley, when in her deity form, had trapped him in that hell dimension. So, yeah, it made things a bit awkward.

Charley has her hands full. She is trying to convince everyone that Reyes will remember her….in time. She is also hiding her daughter from the Vatican, who has taken an interest in her. Her best friend’s teenage daughter has decided to open a PI venture. She is also trying to keep a friend out of jail by covering up the murder of a hot-headed criminal. On top of that, she also gets a case when someone or something is attacking and killing humans who are sensitive to the paranormal world. It’s a lot on her plate and will it implode on her?

Charley was still her snarky self in The Trouble with Twelfth Grave, which was awesome. Charley is that one girl that you can count on to help you out. When Peri told her what happened, Charley was there with a plan to help her. That plan cracked me up and I did sing The Mission Impossible theme song in my head the entire time they were doing it. I could see myself being friends with Charley, she was that interesting to be around.

I do wish Reyes was more in this book. I loved reading the sexual tension between Charley and him. Also, seeing him fight that evil part of himself was very interesting. I did think that the author included a very interesting plot twist towards the end of the book with Reyes. Makes me think about what could be happening in book 13.

The sexual tension between Charley and Reyes could be cut with a knife. He did what he did in book 1 and would show up and molest her. There was that one sex scene where Charley burned her clothes off. Talk about hot!!

The Trouble with Twelfth Grave was a very good book. I enjoyed reading it. The plot and characters were fleshed out. Unfortunately, you do need to read the earlier 11 books before reading this one. It is not a stand-alone book.

Will I reread: Yes (after I have read the earlier books)

I would like to thank Darynda Jones, St. Martin’s Press and NetGalley for allowing me to read and review The Trouble with Twelfth Grave.

6 thoughts on “The Trouble with Twelfth Grave (Charlie Davidson: Book 12) by Darynda Jones”