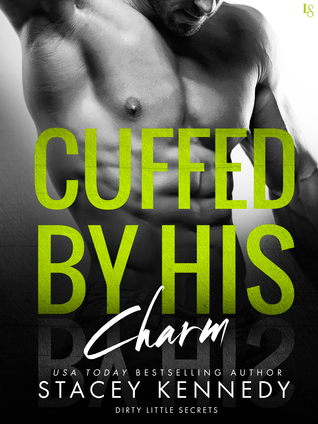 Bound Beneath His Pain – Book 1

Tied to His Betrayal – Book 2

Restrained Under His Duty – Book 3

Cuffed by His Charm – Book 4

Where you can find Cuffed by His Charm: Barnes and Noble | Amazon

A tabloid scandal unites a powerful mogul and a woman from the wrong side of the tracks in this tantalizing novel from the USA Today bestselling author of Bound Beneath His Pain and the Club Sin series.

The multimillionaire owner of a chain of successful Irish pubs, Gabe O’Keefe loves being in the spotlight almost as much as he loves women. But when all his secrets are exposed in a shameless tabloid, his glistening reputation takes a hit. What hurts most is learning who sold him out: sweet and sensual McKenna Archer, his own employee. Gabe thought he could trust her. But now he’s got bigger problems than keeping his hands off McKenna.

After putting a difficult past behind her, McKenna would never betray Gabe. But she knows someone who would: her brother, a compulsive gambler who owes money all over town. To make things right, McKenna will have to set aside her feelings for her boss. Easier said than done. Gabe oozes pure temptation. But when they team up, McKenna sees that he isn’t the manwhore she always thought. He’s strong. He’s real. And the heat between them is the only thing that makes sense anymore.

So I had stated in a previous review that I don’t like picking up books mid-series. 9 out of 10 times, the book has the main characters from the other books front and center. I have lucked out with the last couple of book that was part of a series. They were stand-alone and I was able to enjoy the story. Cuffed by His Charm is not such a book. You need to read the three earlier books to understand the dynamics between Gabe and his friends. Trust me on that one. Don’t get me wrong, I enjoyed the story but I felt like I was missing something. And I hate that.

I thought the plot was interesting. Gabe has secrets that are being sold to a tabloid. Everything traces back to his über hot bartender, McKenna. Of course, McKenna says that she would never, ever do something like that to Gabe. But, her brother would because he has a gambling addiction. He owed a loan shark a ton of money and his way of paying him back? Selling Gabe’s secrets to the tabloid. But, when Evan goes missing and a hotel room is covered in his blood, the situation changes. It goes from find Evan and see why he sold out to find Evan and see what happened to him.

I liked Gabe. He was a true alpha male. Used to getting his own way and sexy as heck. He was also a bit of a bad boy. I mean, he owned a sex club. He cared for McKenna. Once she proved to him that she was innocent of selling him out, he did everything and anything to make sure she was safe.

I felt bad for McKenna. Her brother puts her through the wringer time and time again. She was always cleaning up after him. That made my heart hurt. As the sibling of an addict, I know all too well how their behavior and actions hurt. But, when his actions directly affected her, I became angry. I was also happy that Gabe was there. She needed someone like him to lean on.

While the sex scenes were out of this world hot, I did have an issue with a couple of things. One, the opening chapter where Gabe is having angry, revenge sex with McKenna. While it was hot, I was skeeved that they did it on the pool table. The thoughts “Ouch, felt burn” and “I hope it was super clean” ran through my mind. My other issue is that there was next to no BDSM in the book. Only that one scene at the club in Gabe’s private room. I wanted more!! Sex was not lacking in this book. Nope, not at all.

I loved the end of the book. The talk that Gabe gave Evan was needed. As was the gift he left him. The epilogue of the book was very sweet. I love it when the author closes all the storylines in ways that you can’t help but like.

Cuffed by His Charm is one of those books that I would put a warning up about. This book is not for anyone under the age of 18. It is also not for people who hate explicit sex or the BDSM scene. If you are easily offended by those, I suggest you skip this book. I, for one, enjoyed it. The plot was good. The characters were enjoyable and I connected with them. The sex was fantastic. I will be reading this book and this series again. The only issue I had is that it was the 4th book in the series. I felt that I was missing something. Other than that, a great read.

Will I recommend to family and friends: Yes but with a warning about the explicit sex and violence in the book

Why: Sex, violence, and language.

I would like to thank Stacey Kennedy, Random House Publishing Group, Loveswept and NetGalley for allowing me to read and review Cuffed by His Charm.