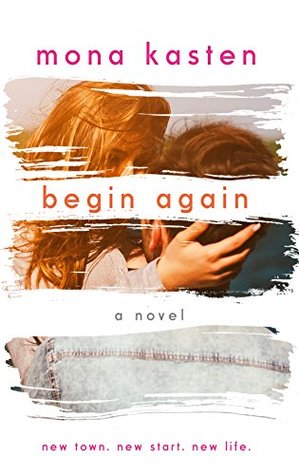 Where you can find Begin Again: Amazon | Barnes and Noble

He makes the rules. She breaks them all.

A new start. It’s the only thing keeping Allie Harper going when she packs up her life and moves across the country to Woodshill, Oregon. She’s about to start college, desperate to leave the ghosts of her past behind her. Even if that means never talking to her parents again.

Now the hard part – finding an apartment before classes start. Just when it seems she’ll have to live out of her car, Allie visits one more place. It’s beautiful. With one exception: can she stand being roommates with campus bad boy Kaden White? Sure, Kaden is sexy with his tattoos and careless attitude, but he’s also an arrogant jerk. With nowhere else to go, Allie moves in.

The first thing Kaden does is make a set of rules. Either Allie obeys, or she’s out:

1. Don’t talk about your girl problems.
2. Keep your mouth shut if I bring someone home.
3. We will NEVER hook up.

Easy enough, thinks Allie. Who would want to get involved with a brute like Kaden? But the more she gets to know him, the more she sees beyond his gruff facade. He, too, is harboring some painful secrets. For Kaden and Allie, it gets harder and harder to ignore the sparks between them. And the lines between the rules start to blur-

Begin Again is a beautiful romance that shows us just how possible it is to start over. To find freedom in heartbreak and love in the most unlikely places.

I didn’t know what to think when I started reading this book. To be honest, I thought that this was going to be a college-themed 10 Things I Hate About You.  So when I got into reading Begin Again, I was surprised at how much it wasn’t like that. Actually, I was very surprised at how deep this book got. I would have never gotten that from the blurb. Let’s say that some very heavy subjects were discussed.

The book starts off with Allie searching for apartments after moving to Oregon. She is frustrated when she arrives at the last apartment and is told to leave by Kaden White. He doesn’t want a female roommate. After exploding on him, Kaden relents and offers her the apartment. Only thing, there is a set of rules that Allie must follow or she will be thrown out. Allie is thrilled and agrees. Only thing, she isn’t the only one breaking the rules after a couple of months. Allie is falling for Kaden and falling fast. But Allie has secrets that will threaten her relationship with Kaden if they ever come to light. Only thing, Kaden has secrets that surpass Allie’s and he will do anything to keep them from her. When they come to light, will Allie and Kaden’s relationships survive?

I was kind of annoyed with Allie during the first half of the book. She came across, to me, as this sheltered child who never did anything in her life. I mean, she never had store-bought pizza before and cried over it. It got old fast. The author started dropping hints about her and her relationship with her parents. I thought that she was rebelling against them. When it was revealed that her parents never treated her right, I felt bad for her. I then understood the weird reactions to different situations. I also got why Kaden rubbed her the wrong way. But I was floored when her huge secret was revealed. I am not one to surprise at books and I was very surprised at that. It made me forget my annoyance with her and I started to think of her as a very strong woman. Even more so when she stood her ground with Kaden.

Kaden came across as a huge jerk at the beginning of the book. Who would even think to write those rules? But the more he interacted with Allie, the more I could see that he was starting to like her. Then he was breaking the rules to be with her. But he was always so mysterious and there was talk about his issues with depression/suicide. But when his huge secret was revealed, I was floored. I was not expecting what I read. What I also was not expecting was how cruel Kaden was to Allie after she found out. While it was hard to read, I did think that it was necessary for the storyline.

The sex in Begin Again was pretty hot. Once Kaden and Allie did it, they were like bunnies. They did it everywhere. I did like that the author also implied a lot of sex going on. There were only a few sex scenes with the rest being implied. Made for a great read that was.

I thought that the romance in Begin Again was very well written. The author took two very wounded people and made them fall in love with each other. But she didn’t end the book there. Instead, she had them go through the wringer before ending up together. It was Kaden trying to win Allie back that made the book for me.

The end of the book was definitely a HEA. I cried more than Allie did in the book during the ending. I can’t wait to read book 2 to see who is featured next. I also loved the epilogue. It made my heart happy!!

Begin Again was a wonderful read. It had a great plot with characters that grow on you. This is also a New Adult book. With the subject, language, and sex…I wouldn’t recommend for anyone over the age of 19.

Why: Sex, language, and mild violence. There is also talk about rape, suicide and sexual abuse in the book. I would use discretion if letting anyone under the age of 19 read.

I would like to thank Mona Kasten, be-ebooks and NetGalley for allowing me to read and review Begin Again.

All opinions stated in this review of Begin Again are mine.

I received no compensation for this review.