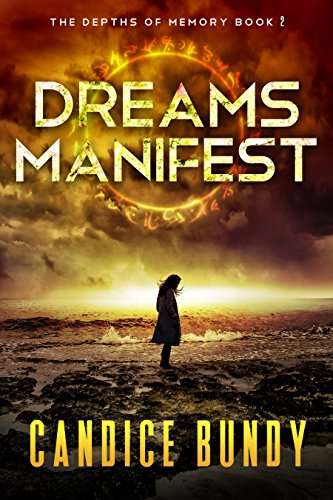 Where you can find Dreams Manifest: Amazon

Reeling from the revelations of who she is or was, before her memories were ripped from her, Rai Durmah is faced with a new and more frightening threat. While scouting Az’Unda for potential Juggernaut settlement, Selector Brague of the Hegemony, who can end the human colony on a whim, encounters Rai Durmah and is shocked by her unusual abilities. Rai and her new family flee the scene, but Brague will not rest until he understands how Rai, a human colonist, developed her unique gifts. As she flees, Rai stumbles upon an ancient power that could change the face of Az’Unda and perhaps save the humans that live there.

Caught between her adoptive family who doubts her loyalties, the alien Juggernaut, and a Guardian protector she fears, Rai desperately attempts to escape her pain and unwittingly unearths the answers to solve or destroy Az’Unda’s future.

Dreams Manifest starts off with the introduction of the Juggernaut species. They are a bug-like species. The closest that I can come to describing them is that they reminded me of evolved beetles. The main Juggernaut that we are introduced to is Brague. Brague is a Selector. A Selector in their society is someone who scouts out planets where the Princesses and Queens can lay their young and raise them. Az’Unda is the next planet on their list. I was a tad creeped out by telepathic evolved beetles. Made me look at the beetles I see outside differently…lol.

As for the main storyline with Rai, that starts off almost immediately after The Dream Sifter ends. Rai and Graeber are still at odds. Graeber has told Rai a little more about her past. Her Septmates are wary of how Graeber is treating Rai. That soon passes onto Rai herself when she refuses to tell them exactly what is going on with Graeber. It is during a heated exchanged with Ponar, that accidentally run into Brague. Rai and Brague make contact, with Brague being very surprised that she can mind speak with him. Unfortunately, that only drives the wedge between Rai and her Septmates even deeper. Running from Brague, they make for Jeweled Cove. It is there that everything catches up to Rai. She does something unthinkable. But in that unthinkable act, she finds something both fantastic and terrifying. Something that could be used to save Az’Unda from the Juggernauts.

If I had thought Rai was strong in the last book, she exceeded my expectations in this one. She was so strong, except that one time. But even after she returned and found Graeber, she was strong. She had to be. I mean, look at what happened to her.

I thought the way the storyline about who was poisoning the berries ended perfectly. I had my suspicions about who it was. So when it turned out to be that person, I said to myself “I knew it!” So when Rai did her brand of justice towards that person, I did an internal cheer also.

Speaking of the plague, I was surprised at how it started and at who started it. Once it was explained to Rai, I understood why. That entity was upset that not only people were intruding on her world but they did something that cloaked her from others of her kind. Someone who was a traitor. That, someone, was also the same person who was poisoning the berries. So, I felt that getting rid of that person was for the best.

I thought the end of the book was great. It ended on a cliffhanger. Which means I am going to have to wait until book 3 comes out to find out what happens to Rai and her friends.

Dreams Manifest is the engrossing 2nd book in The Depths of Memory trilogy. I could not read this book fast enough. The characters were fleshed out and the plot was great. I cannot wait to read book 3.

I would like to thank Candice Bundy and Lusios Publishing for allowing me to read and review Dreams Manifest.

All opinions stated in this review of Dreams Manifest are mine.