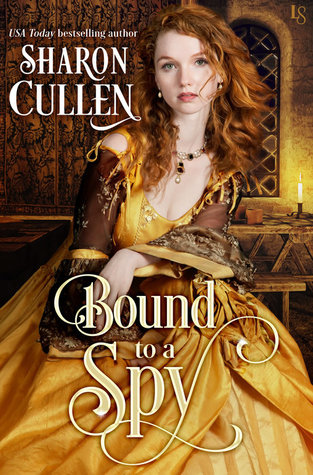 Series: All the Queen’s Spies

Where you can find Bound to a Spy: Barnes and Noble | Amazon

A fierce Highland lass puts her life—and her heart—in the hands of a dashing British spy in this exhilarating romance from the USA Today bestselling author of Wed to a Spy.

Rose Turner’s mother sent her to the court of Mary, Queen of Scots, to give her a better life. Raised with rowdy brothers in a notorious border clan, Rose has plenty of experience fighting and thieving—and practically none when it comes to matters of decorum and discretion. Without a single ally, she has little hope of making a good marriage to salvage her family’s reputation. But after overhearing several influential lords plotting to murder the King of Scotland, Rose meets a man after all: a handsome spy trying to shield her from danger.

As one of the Queen Elizabeth’s top agents, Will Sheffield has come up north to keep a close eye on the goings-on at Mary’s court. A consummate professional, Will notices Rose’s presence at the secret meeting . . . and he’s not the only one. The wild, naïve beauty has made a fearsome enemy—and only Will can keep her safe. But after an attempt on Rose’s life pulls them tantalizingly close, Will faces an agonizing choice between professional loyalty or powerful passion.

Historical romances are one of my favorite genres to read. My favorite historical romances are those that take place over in England/Scotland. I can’t get enough of them. But lately, I have read more contemporary novels. So when Bound to a Spy came up next on my TBR pile, I dove right into it. I am glad I did because it was a great book!!!

Bound to a Spy is the 2nd book in the All the Queen’s Spies series. Taking place in Edinburgh, Scotland during Queen Mary’s reign, this book is full of court intrigue, romance, and sex. So yes, a book that I can sink my teeth into. As I said in my earlier review of Wed to a Spy, I haven’t read a lot of books that were set in Tudor era Scotland. So to read another book set in that era was fantastic.

Rose was one of my favorite characters in this book. She was viewed as a bit of an oddity because she liked to be outside. No matter what the weather, she was there. She was coming in from the outside when she overheard several lords planning to kill the Queen’s husband, Lord Darnley. Rose feared Lord Darnley ever since he attempted to rape her the year before. But her conscience wouldn’t let her let the lords kill him. That was another reason I liked her. She was willing to put aside her fear and dislike for Lord Darnley and attempt to let the Queen know what was going on.

Will, however, I couldn’t get a handle on him. He was so quiet in the book. His back story was sad but not as sad as others I have read. His constant seesawing back and forth about Rose also drove me nuts. Either he loved her or he didn’t. And to use the excuse about his job. Ugggh. When he finally did make his decision, it was almost too late.

I will say that for a Tudor era book, the sex and sexual situations that Will and Rose found themselves in were through the roof. Also, for a Tudor era book, I found Rose open about sex. I mean, she was willing to return the favor for Will after he went down on her. Not only that, but she liked it! I was very surprised at that. I did laugh when she was telling her roommate about what she did. Can we say “Kiss and tell“.

The end of the book not what I expected. I was a little shocked by the brutality of certain scenes. I did laugh (and sorry for the spoiler!!) when Rose laughed at Lysle’s small member that he couldn’t get up. I could also understand why Rose didn’t want to do what she needed to do. I did think that Will’s proclamation felt more like he was forced into doing it. It came after a talk with Rose’s father. I also felt that he was risking Queen Elizabeth’s wrath to do that without letting her know.

Bound to a Spy is a well-written book. I was captivated by the plot and loved the characters. The sex scenes were very steamy. This is a book that I would read again!!

Why: Sex and violence. There is an attempted rape scene and several scenes where a woman is beaten.

I would like to thank Sharon Cullen, Random House Publishing Group, Loveswept and NetGalley for allowing me to read and review Bound to a Spy