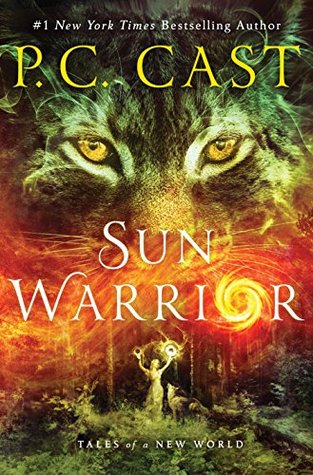 Series: Tales of a New World

Where you can find Sun Warrior: Barnes and Noble | Amazon

The battle lines have been drawn and Mari, an Earth Walker, and Nik, a Companion, who were once from rival clans now find themselves fighting to save each other and their people from destruction.

Thaddeus betrayed his own people, killing Nik’s father and destroying their entire clan. But he wants more. He wants the power he believes Mari has stolen from him and his people and he will do anything he must to get them back, even if it means destroying everything in his path. There is only way to stop Thaddeus, but it means a harrowing journey for Mari and Nik into the heart of darkness. But if they hope to survive the coming fight, they have no choice but to believe in each other.

Trigger Warning: Talk of past rape, abuse of animals

Going to put this right out here. If you haven’t read Moon Chosen, then don’t read this review of Sun Warrior. I cannot review this book without giving away major spoilers for Moon Chosen.

The character and world building were fantastic. The backstories to each character were rick. As was the descriptions of the world. Everything was multilayered and when one layer was peeled back, another one was there. I love reading books that I can get lost in. If I can picture a world, then the author is doing something right.

Usually, I do a summary of the main plot of the book.  If I was to outline each one, this blog post would be super long. No kidding. So I won’t be doing it. All I’ll say is that this book will surprise you. I know I was very surprised at the plot twists incorporated into each storyline.

Mari came into her own in this book. She went from the shy girl in Moon Chosen to a woman who wasn’t going to let anything hold her back. She assumed the leadership role with an ease that did surprise me because of how she was in Moon Chosen.

Nik also came into his own in the book. I do think that losing his father and then bonding with Laru, the Alpha male, was a huge part of that. Having that bond with a Shepherd was what was missing from his life. He was able to take the strength of that bond with Laru and use it to help him in certain parts of the book. He was also a great co-leader with Mari….once he got the trust of the Earth Walkers.

Thaddeus scared me. I couldn’t put my finger on what drove him insane at the end of Moon Chosen. When it was revealed, I felt bad and then was a little disgusted. But my feeling bad for him went away when he refused help for Odysseus. Instead, he blamed Mari for what happened. When The Reaper started communicating with him, I wasn’t very surprised. I was surprised that he was willing to hurt his Clan, though. Very surprised.

If Thaddeus scared me, then The Reaper terrified me. I was not expecting the author to go in the direction she did with Dead Eye’s storyline. But once I got used to it, I actually liked it. The Reaper was not a good deity. He was the God of Death and he loved it. I do feel bad that Dead Eye got absorbed into The Reaper’s personality. I do think that Dead Eye was not a bad person. He was doing what he thought was best for his people. Then, bam, he gets taken over by The Reaper. I do hope that he will be able to fight his way out of The Reaper’s control and become himself again.

The end of Sun Warrior was intense. There was so much happening that I almost couldn’t keep it straight. Not all storylines were wrapped up. Actually, there were a couple of new ones that started right before the end. Sun Warrior also ended on a cliffhanger. I have made my feelings about cliffhangers very clear in other reviews. But this one, oh boy, it makes me want to read book 3!!

Sun Warrior might be long, but it is a fantastic read. Not a standalone book, you do need to read Moon Chosen to understand what is happening in this book. Packed with fantasy and action, I was glued to the book. I couldn’t put it down. The world building was unlike anything I have read before. The character building was as good.

Why: Language and violence. There is also talk of past rape and there are scenes of animal abuse at the end of the book.

I would like to thank P.C. Cast, St. Martin’s Press and NetGalley for allowing me to review Sun Warrior.

All opinions stated in this review of Sun Warrior are mine