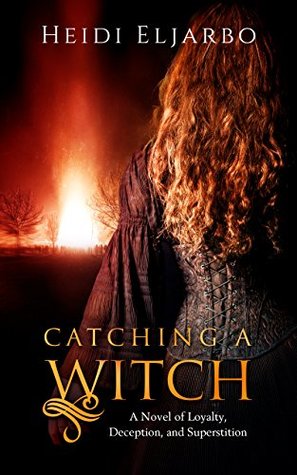 Where you can find Catching a Witch: Barnes and Noble | Amazon

What Would You Do to Save Your Best Friend from Burning?
The year 1660 is when it all changed…

That’s when a witch-hunter comes to Clara Dahl’s seaside village in Norway. She’s horrified to discover how fast her neighbors and friends are to turn against each other. She soon realizes her sleepy, little, picturesque corner of the world has been invaded by evil—and it has nothing to do with witchcraft.

As neighbor turns against neighbor, Clara finds herself drawn into the fray, forced to do what she can to protect her friends and loved ones. An educated and upstanding minister’s daughter, Clara speaks out against the witch-hunter’s unjust treatment of those accused of witchcraft. She sees how he plays the villagers, using their superstitions and religious beliefs to make good people accept horrible things.

When Clara’s best friend Bess is accused of being a witch, Clara must make an incredible sacrifice to save not only her friend but the entire town… before it’s too late.

In 1660, women had no voting rights, couldn’t own property, and were treated as second-class citizens. If that weren’t bad enough, many innocent women—especially poor women—were tried and executed for witchcraft. The people responsible for their deaths were often their own friends, family members, and neighbors.

Catching a Witch is a story about a young woman who’s willing to do whatever it takes to protect the people she cares about most in this world.

You’ll love this book if you enjoy…

Historical dramas
Witches and witch hunting
Historical thrillers
The history of religion and superstitions
A story with a strong female protagonist fighting for what’s right
Readers of similar books such as Year of Wonder by Geraldine Brooks, The Physick Book of Deliverance Dane by Katherine Howe, The Heretic’s Daughter by Kathleen Kent, and The Witch of Blackbird Pond by Elizabeth George Speare will love Catching a Witch.

Scroll up and click “buy now” to help Clara save her village from evil.

Clara has returned to her home village in Norway. She had lived in Okinawa, Japan and decided to make the journey home after her father dies. She is staying with her best friend Bess, the town’s healer and midwife. Clara starts noticing that on the surface the village seems to be unchanged. But there are undercurrents that worry her. Passing through Europe she heard of the witch hunters. She is very worried that the hysteria will find its way to Norway. And it does. Clara is horrified at how the witch hunter fans the fame of hysteria. When Bess is brought in, Clara fights to free her and the other woman held before they are killed. She even goes as far as to petition the King of Norway to stop this madness. She also makes a plan to help Bess and the women. But will she be able to help them? Will she be able to stop the madness before more innocent women get killed?

I thought Clara was a strong woman. She traveled alone across Europe in a time where being a woman was risky. She was also educated, which was unheard of back then. She was concerned, as she should have been, about the persecution of women across Europe. She worried that it could come to Norway. Her worries were well founded when a witch hunter, Angus Hill, showed up shortly after the festival. I was as shocked as her when he performed his first witch hunt. His first victim was a simple-minded woman who lived by the sea. Then it extended to other poor, single women that were disliked or feared by the village council and their families. I was horrified when Clara was forced to translate for Angus Hill. That is how she saw another childhood friend, a nun, get burned at the stake.

But instead of cowering, Clara became very outspoken against the witch hunter. I thought that would put a huge target on her head but Angus took it as a sign to pursue her. Puke. When Bess was taken in, at 8-9 months pregnant, Clara was driven to action. She traveled to the capital and managed to get an audience with the King. She returned home after he dismissed her. That is when she formulated her plan to break Bess and the other women out of where they were being held. Like I said, a strong woman.

The only true bad guys in this book were Angus Hill and his helpers. Mainly the twins, Taran and Tilla. The harm that those two girls did in that village was awful. Put it this way, they paved the way for Angus Hill to come in. They also gave him the names of the women he could murder. Each woman had done something that angered the twins or their mother. I wanted to reach through the book and smack the smirks off their faces. Evil, evil children. Evil. I did wonder why Angus didn’t want one of them as a wife but wanted Clara. I mean, they held the same murderous beliefs that he did.

I also wanted to string up Angus. I know he was a product of his time but to drown women and burn them at the stake on rumors? Awful. I remember thinking “I hope he goes to a hot place when he dies“. I have never hated a character as much that I wished him dead. Oh, and the village council and the twins. But he was the main person that I disliked.

I was a little surprised at the ending of Catching a Witch. While I had a feeling what happened was going to happen, I was still surprised by it. Also, I was surprised by a character’s turnaround. I didn’t see that coming either. And the end, the epilogue, was a huge surprise.

Catching a Witch is a well written historical fiction book. The book did start very slowly but once Angus comes to the village, it picks up. By the end of the book, I couldn’t put the book down. The author does tweak some of the storylines a bit but she explains why in the afterward. The characters came to life. And the plots were very well written. Catching a Witch is a book that I would read again.

Why: No sex or language. But there is violence. There is a graphic scene where a woman is drowned and where a woman is burned to death. I would advise caution in anyone under 16 reading because those scenes could be traumatic to some people.

All opinions stated in Catching a Witch are mine