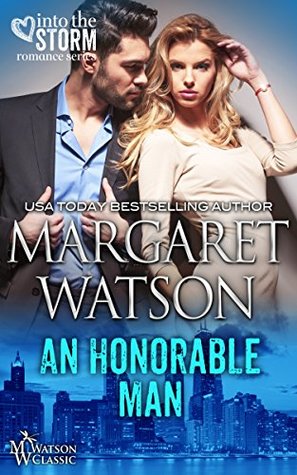 Where you can find An Honorable Man: Barnes and Noble | Amazon

HOW FAR WOULD YOU GO?
Two years ago, Luke McKinley had gone too far. One wrong move had cost him his badge, leaving him nothing – except burning anger at the woman he blamed for his dismissal.

WHAT PRICE WOULD YOU PAY?
The guilt had followed Julia Carleton ever since. But now she desperately needed Luke’s help. Yet the rough-edged P.I. would never agree to her plan if he knew the whole truth.

WHEN WERE THE STAKES TOO HIGH?
She had put Luke’s life on the line – and gotten her heart caught in the crossfire. For the first time in her life, she was in love. But one ugly secret could cost her everything…

I have read a lot of series lately. There are pros and cons to reading series. Pros are that you get to connect with characters from the other books in the series in the book that you are reading. Cons are that usually the books cannot be read as a stand-alone novel. You have to read the series from the first book to get a handle on the characters and what is happening. With the Into The Storm series, you do not have that issue. You can pick up any book from the series and read it without wishing that you had read the other books.

An Honorable Man starts off on a very tense note. Luke McKinley is a disgraced cop who is working as a PI. He holds deep anger against Julia Carleton. She was the lead investigator on the IAD team and it was her suggestion that got him dismissed from the force. So when she shows up at his office and asks for his help, he almost turns her down. But something about the case that she was working on calls to him. It is only after an attempt on his life that he agrees to help her. What Luke wasn’t expecting was to fall in love with Julia. Julia has a big secret that will threaten her and Luke’s fledgling relationship. A secret that will try Luke’s trust to the core. It will also make him question everything that he thought he knew about Julia.

Luke came across as a jerk towards Julia at the beginning of the book. But, once it was revealed that she was the lead investigator on the case against him, I understood. But, regardless of his feelings for Julia, he still helped her. In doing that, he began to see her as a human being and someone who he came to care for. I wouldn’t classify it as love until they were in the warehouse. But even then, he was blindsided by her secret.

I felt bad for Julia. She had a lot of guilt over her role in Luke’s investigation. She was also very wary of approaching him for help because she knew how he felt about her. I do have to give her credit, she was a tough one. I do think that she should have been more upfront with her secret with Luke. That way he wouldn’t have been blindsided by it at the end.

The sex scenes in An Honorable Man were not graphic. I like graphic sex scenes very much but sometimes understated is the way to go. And that is how it was with Luke and Julia’s sex scenes. I also liked the romance. It was fast but it seemed right between them.

I loved the ending of An Honorable Man. Julia’s case got solved. I did feel bad that her secret was revealed the way it was but she should have told Luke sooner. All the storylines were wrapped up in a way that satisfies me as a reader.

An Honorable Man was a great read. The plot was fast-moving and the characters were fleshed out. I enjoyed reading it very much!!

I would like to thank Margaret Watson and Dragonfly Press for allowing me to read and review An Honorable Man.

4 thoughts on “An Honorable Man (Into the Storm: Book 3) by Margaret Watson”