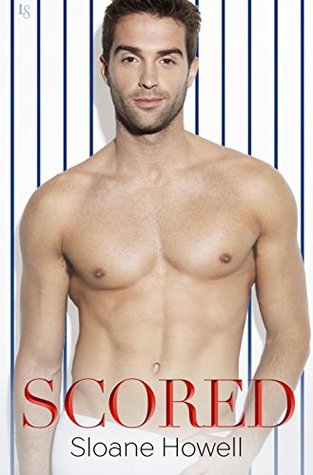 Where you can find Scored: Barnes and Noble | Amazon

He’s a player. But she’s about to score.

Opposites really do attract* as a sassy salesgirl turns a pro athlete’s life upside down in this supercharged standalone novel of seduction from the author of Bossed.

Kelsey: My mom would tell you I’m quite the catch, but since my last boyfriend, I haven’t been dating much. Maybe it’s my rocker style or my lack of filter that intimidates the boys. So I’m pleasantly surprised when Matt Stallworth waltzes into the indie record store where I work and gives as good he gets. Turns out Matt is a professional baseball player, which should mean he’s out of my league. But if he wants to hook up with me, he’s going to have to follow my rules.

Matt: After winning my MVP award, I learned that a guy can get used to having beautiful women practically throw themselves at you everywhere you turn. But everything changes the first time I see Kelsey Martin, and something just clicks. She’s hot, snarky, and whip-smart. I’ve got to see her again. The only problem is, she sees right through all my best moves. And I’m going to have to step up my game to convince Kelsey that I’m playing for keeps.

First impressions are everything in life and should be applied to books too. A cover should portray a book to a point. It should convey the characters and the plot. A cover is the book’s first impression to people. I bring this up because of the cover of Scored. I can appreciate a half-naked man with a sultry smirk but the cover does not give the right impression of the book. Where is Kelsey and where is the mention of baseball, which one of the main plotlines in the book? Not there.

I felt that this book made for an interesting read after all the hockey romances I have read lately. I was disappointed that it wasn’t mentioned more. The focal point of the book is Matt’s relationship with Kelsey. The baseball plotline was there but you had to dig through tons of sex to actually get to it.

This is a romance book, through and through. Actually, it should be classed as an InstaLove and InstaLust book. The first few chapters were InstaLust. The romance didn’t come into play until almost the end. If this was real life, I would say that Kelsey and Matt would have a shelf life of Kim Kardashian’s 72-hour marriage. But it is fiction and it was pretty fun to read, so no complaints here.

I liked Matt but I had to wonder what he saw in Kelsey in the beginning. He also came across as stalkerish when he was calling Ethan and demanding to know where she worked. I didn’t understand why he didn’t tell her about his impending trade. I mean, I could understand in the beginning because he was trying to get her to trust him. But after they were dating? Yeah, he should have said something.

Kelsey drove me batty during the book. I can understand why she had issues trusting men. I mean, I know that I would have been gun-shy if I found my ex in bed with a groupie. But, she needed to let down her guard a little. She was so flipping uptight. I didn’t blame her when she found out about Matt’s impending trade. But I did think that she went a little overboard with her reaction. Even Jenny (who I couldn’t stand in Bossed) said so.

The sex scenes are what made the book in my eyes. If you like graphic sex scenes, then read this book. Matt and Kelsey bang like bunnies everywhere. They did everything from public sex to talking dirty to roleplaying. There were a few oops scenes thrown in. Like when Matt and Kelsey were getting it on at the museum and they knock over the Big Bopper’s coffin. Or when Kelsey sexted Matt but his friend picked up the phone and got an eyeful of boobs.

The end of the book took me by surprise because I did think that Matt was going in one direction with what he did. And don’t get me started on the epilogue!!! Talk about sweet and romantic!!

My Summary of Scored:

My view of Scored was colored by Bossed, which I didn’t like. But as I read the book I could see how unlike the two books were. It is pretty rare that I give the 2nd book in a series a high score than the first one. Scored had red-hot sex scenes and likable characters. I could relate to both Matt and Kelsey and I loved reading their sexual exploits.

I would like to thank Sloane Howell, Loveswsept, Random House Publishing Group and NetGalley for allowing me to read and review Scored

One thought on “Scored by Sloane Howell”