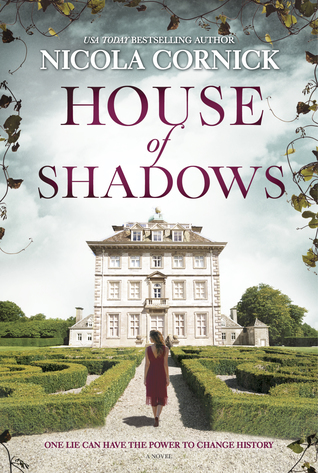 Where you can find House of Shadows: Barnes and Noble | Amazon

The wooded hills of Oxfordshire conceal the remains of the aptly named Ashdown House—a wasted pile of cinders and regret. Once home to the daughter of a king, Ashdown and its secrets will unite three women across four centuries in a tangle of romance, deceit, and destiny…

In the winter of 1662, Elizabeth Stuart, the Winter Queen, is on her deathbed. She entrusts an ancient pearl, rumored to have magic power, to her faithful cavalier William Craven for safe keeping. In his grief, William orders the construction of Ashdown Estate in her memory and places the pearl at its center.

One hundred and fifty years later, notorious courtesan Lavinia Flyte hears the maids at Ashdown House whisper of a hidden treasure, and bears witness as her protector Lord Evershot—desperate to find it—burns the building to the ground.

Now, a battered mirror and the diary of a Regency courtesan are the only clues Holly Ansell has to find her brother, who has gone missing researching the mystery of Elizabeth Stuart and her alleged affair with Lord Craven. As she retraces his footsteps, Holly’s quest will soon reveal the truth about Lavinia and compel her to confront the stunning revelation about the legacy of the Winter Queen.

I was a little hesitant to request House of Shadows. I actually debated, for a little while, on requesting this book. I haven’t read anything about Elizabeth Stuart or the Stuart Era (1603-1714). I had a feeling that there would be many POV’s. Many POV’s, for the most part, annoy me. I can’t keep up with the story. What ended up making me request this book from NetGalley was the storyline and, believe it or not, the cover. I thought the cover was beautiful. Having read House of Shadows, I can say with confidence that this cover describes the book pretty well.

House of Shadows will sweep you away from the first chapter. You get sucked into the three storylines in the book. The book came alive for me, which thrilled me to no end. It has been a long time where I was engrossed in a book.

I thought the mirror and pearl being evil and reigning havoc in every storyline was great. You have inanimate objects that have the power to destroy kingdoms, houses, and lives. What I enjoyed is that they were never together after Craven separated them. Even with them separated, the havoc they did was immense and spanned generations.

Going, to be honest, here, I wasn’t a huge fan of Elizabeth Stuart. Elizabeth bugged me because she kept Craven dangling on the end of a leash. She said she loved him but she refused to go public because she was a Queen and he was a commoner. That drove me nuts (as it did Craven). I thought, as he did, that he was kept around to clean up messes that her family made.

Lavinia, oh Lavinia. I knew that she was going to show up in the story but I didn’t expect that she would show up as journal entries. I thought that was ingenious of the author because you read Lavinia’s story as Holly was reading it. Lavinia got herself in a lot of trouble with Lord Evershot. At first, he was a gentleman towards her but the more Holly read, the more twisted he was. I was shocked that the author chose to portray him as such but, looking back, I can understand why. He got corrupted by the thought of finding the pearl. That turned him into a person that Lavinia didn’t recognize. I do wish that her affair with Robert turned out better. But, as with Elizabeth, it wasn’t fated to be.

How Holly felt after her beloved older brother, Ben, went missing was awful. She adored Ben, hero-worshipped him, to be honest.  She decided to follow Ben’s steps to see if she could find out what happened to him.

The end of the book was both heartbreaking and heartwarming. I was sad at parts and happy during others. I know this is vague but you need to read the book to understand why I wrote that.

My Summary of House of Shadows: 5 stars

House of Shadows was a fantastic read for me. You are pulled into Stuart Era France and England, Regency England and present-day England. With plots that are taken right out of history, characters that are flushed out and 3D, and romances that span lifetimes, this is a book that you need to read.

Why: Sexual situations (nothing graphic but characters do have sex), language and violence. There is a very graphic scene where a woman is beaten with a whip and then with stinging nettles.

I would like to thank Nicola Cornick, Harlequin, Graydon House, and NetGalley for allowing me to review House of Shadows

One thought on “House of Shadows by Nicola Cornick”