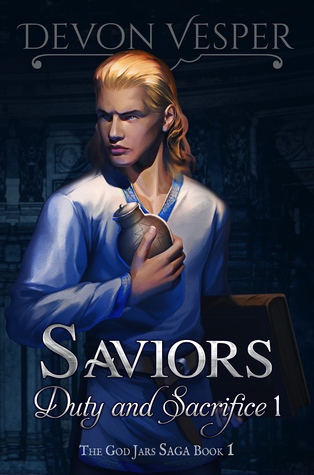 Saviors is the first book in The God Jars Saga by Devon Vesper. I am a huge fantasy buff, which I have mentioned in other reviews. I have read a few fantasy/LGBTQIA books that I loved and a few that tanked. So, when I had the opportunity to review Saviors, I jumped on it. I am glad I did because I loved this book.

Saviors is a somewhat dark book. It starts with Valis running away from his father. He had already sacrificed Valis’s mother and was determined to do the same to Valis. Valis, in his haste to get away, runs into Kerac and Darolen. They are two warriors who serve the god Aesriphos and they live to fight Qos’s evil followers. They rescue Valis. It is after rescuing Valis that a heartbreaking truth comes to light. Valis has been abused to the point where he doesn’t trust anyone….even if they are helping. Kerac and Darolen make the decision to take Valis back to the monastery with them. There he can heal. But the journey to their land is full of danger and some surprising truths about Kerac and Darolen. Truths that will either make Valis trust them and accept them as the fathers that he needs or push them away in fear.

I felt awful for Valis. He had such a hard life up until he met Kerac and Darolen. His father used him as a punching bag. On that horrible night, tried to sacrifice him to the god that he worshipped….Qos. It was a miracle that he ran right into Kerac and Darolen. They protected him and vowed to help him in any way that they can. Valis does not trust them. I mean, he came out of a lifelong abusive relationship with someone who was supposed to protect him. But I liked seeing the trust in Kerac and Darolen emerge in Valis. It reminded me of a butterfly coming out of a chrysalis. It was so fragile and it wavered back forth. I was glad when he finally made the decision to trust them. It was like I was reading a new character.

Kerac and Darolen surprised me. They were two huge warriors with big hearts and in love with each other. They cared for Valis like he was their son. Even when Valis was running away and lashing out, they stood by him and loved him. They showed Valis what love is and what love could be like. I couldn’t have asked for better people to be Valis’s adopted parents. What I liked was how they explained the religion of Aesriphos to Valis after he spied on them making love. It made perfect sense and I loved it.

Saviors is a well-written fantasy book that has LGBTQIA elements in it. The plot is fantastic. The characters are fleshed out and grow on you. I cannot wait to read the next book in the series.

All opinions in this review of Saviors are mine

One thought on “Saviors (The God Jars Saga: Book 1) by Devon Vesper”