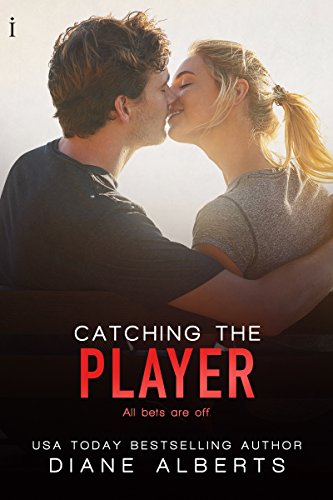 Where you can find Catching the Player: Barnes and Noble | Amazon

It all started with a bet…

Kassidy Thomas decided to stop hiding behind her past and start living, but she didn’t quite bet on that start including her singing a horrible song in front of the most handsome bachelor in the NFL, Wyatt Hamilton. She also doesn’t think he’d then consequently ask her out on a date but turns out when you’re actually living life…crazy things happen.

He needs to win…

Wyatt Hamilton is a player in every sense of the word. Married to the game, he has no interest in relationships, love, or even second nights with the same woman. But from the second the girl-next-door beauty Kassidy knocks on his door to deliver a singing telegram, nothing goes as planned. He can’t stop thinking about her and keeps showing up on her doorstep for more. That is until the unthinkable happens…

And all bets are off.

Like I said above, the book started off great. Kassidy is sent on a singing telegram to Wyatt’s house. After singing to him, she ends up accepting a date to help him with some Chinese sponsors. It is after that “date” that they hook up and agree to have a no strings attached relationship. That is where I started to become bored. I also started not liking the main characters around that time. It was because of how Wyatt acted. If I could reach through my Kindle and smack someone, he would have been number one on my list.

I did like Kassidy and connected to her on several levels connected with her. Her issues with being decisive struck a chord with me. I am terrible with making decisions and I have had a boyfriend break up with me because of that. But, he didn’t do it the way Kassidy’s ex did. That was pretty awful. I liked that she was willing to go with the flow with Wyatt. He wants sex and no relationship, sure, she’ll do it. But I started to get bored with her after a while. I wish that she had a bit more of a backbone. I mean, she did get one when she told Wyatt her news and he reacted in that god awful way. I wish that it happened sooner.

Wyatt, I wanted to smack but he was honest in all his dealings with Kassidy. I wish he was a little nicer about it. I mean, he went out of his way to tell people that they weren’t together….in front of her. Also, his reaction to her news was awful. But, I can see where he was coming from. I mean, if I were a rich, famous, single guy and a chick that I was banging sprang that news on me, I would react the same way. I did like the way that he apologized to Kassidy. I will never look at a cowboy outfit the same way again!!

I felt that Catching the Player ran out of steam mid-book. Everything else after that, I felt, dragged the story on. But, on the flip side, I did like how likable Kassidy was and how realistic Wyatt was. If they were a real-life couple, I would give them a 75% chance of staying together.

The end of the book was very heartfelt. I liked how Wyatt apologized to Kassidy and expressed his love for her. It was actually funny and like I said above, I will never look at a cowboy the same way again…lol. The epilogue was awesome!!

I enjoyed reading Catching the Player but thought it ran out of steam midbook. I did get bored with the book after reading for a while. I also got annoyed with the characters around the same time that I thought the book ran out of steam. But it was a very cute book that was a quick read.

I would like to thank Diane Alberts, Entangled Publishing, Indulgence, and NetGalley for allowing me to read and review Catching the Player

I was not compensated for this review

One thought on “Catching the Player (A Hamilton Family Series: Book 1) by Diane Alberts”