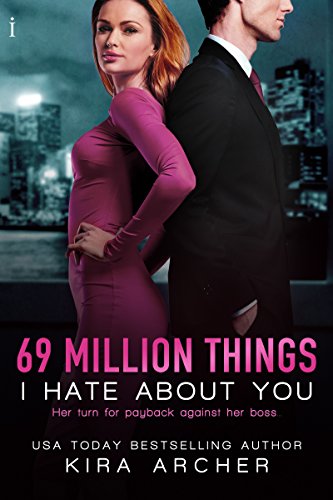 Where you can find 69 Million Things I Hate About You: Amazon | Barnes and Noble

After personal assistant Kiersten Abbott wins sixty-nine million dollars in the lotto, she suddenly has more than enough money to quit her impossibly demanding job. But where’s the fun in that? She decides to stay and exact a little revenge on her insufferable ass of a boss.

Billionaire Cole Harrington quickly figures out something’s afoot with his usually agreeable personal assistant. When he finds out about the office pool betting on how long it’ll take him to fire her, he decides to spice things up and see how far he can push her until she quits.

The game is on, with everyone waiting to see who will crack first. But the bet sparks a new dynamic between them, and soon they realize they just might have crossed that fine line between hate and love.

I wasn’t expecting to like 69 Million Things I Hate About You as much as I did. I was in the mood for a light, funny romance after reading some books that were good but had a heavier subject. When I saw that it was about a personal assistant stays to exact revenge on her boss after winning the lottery, I had to read it. I am glad that I did because I laughed the whole time I read it.

69 Million Things I Hate About You is about Kiersten, a personal assistant to Cole, her boss who makes her life hell. Kiersten and her roommates hit the lottery one night. Kiersten’s gets 69 million dollars. That leaves Kiersten in a place where she can quit her job. She decides that before quitting, she will exact revenge on Cole and try to get him to fire her. But Cole is amused by Kiersten’s antics and he decides that he is going to see how far he can push her before she quits. What they don’t expect is the immediate attraction to each other.

Kiersten cracked me up. The revenge antics that she came up with had me rolling. They started off little, like not answering her phone when Cole called. Then they moved up to middle-sized when she got drunk with his mother, took her to a strip club and got arrested. But the final one was hilarious. Taking 5 billionaires to Amish country on a vacation and stranding them there for 5 days. The only antic that I didn’t find funny was when she misplaced the permit for a charity that is close to Cole’s heart. I thought that it was very petty of her. The only reason she didn’t send for the permits to be sent out is that there was a woman’s name on it. I was like “really” and did an eye roll. That is the only part of the book I didn’t like.

Cole came across as a jerk at the beginning of the book. He expected the personal assistant before Kiersten to reschedule her wedding in to go with him on a business trip. Which gave me a giggle because he was so nonchalant about it after the fact. His reactions to Kiersten not being herself was hilarious. He didn’t know what to do with her. Well, that was until he found the online betting pool and decided to up the ante. From that point on, I was laughing my butt off at his reactions to Kiersten’s antics. They were great.

I do feel that there was no personal relationship between Cole and Kiersten. The book couldn’t convince me that they would actually enjoy being in a relationship. That is the only complaint about the book.

The end of the book was a typical HEA. I can’t wait to read book 2!!

I would like to thank Kira Archer, Entangled Publishing, Indulgence, and NetGalley for allowing me to read and review 69 Million Things I Hate About You

All opinions stated in this review of 69 Million Things I Hate About You are mine.

One thought on “69 Million Things I Hate About You (Winning the Billionaire: Book 1) by Kira Archer”