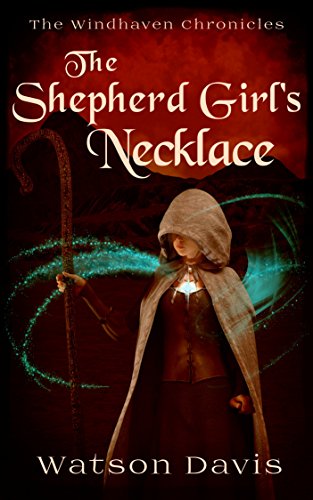 Where you can find The Shepherd Girl’s Necklace: Amazon

Sifa grew up dreaming of one day meeting her father, knowing only her protector, the desert, their herd of goats, and an ache in her heart. When their herd is stolen and she learns a bit of her protector’s past, she decides it’s time to follow her heart and run away. But the world is not as she imagined. Her childhood heroes are villains, every priest wants to sacrifice her to infernal gods, and her heart leads her to the last place she should be with only a gemstone on a rawhide string to protect her.

The Shepherd’s Girl Necklace starts off with a girl, Ka-bes, celebrating her graduating. The merriment is cut short when Bishop Diyune ends the celebration. He casts out Ka-bes out of the clergy and brands her as a liar. Ka-bes finds work on the docks of her hometown with her parents. It is there that she stumbles upon Rector Che-su, the highest priestesses in the city, and a baby. A very unusual baby who needs protecting. Che-su put a geas upon Ka-bes to take the baby, Sifa, to someplace where no one could find her and raise Sifa as her own. Che-su got Sifa to safety in time. Gartan and Dyuh Mon showed up wanting Sifa. When Che-su refuses to tell them where she is, she is taken to the Empress for questioning.

15 years later, Ka-bes has kept her promise to Che-su. She has raised Sifa as a shepherd girl, keeping her in the desert away from people. Sifa is chafing at not being kept away from people and being made to watch their herd of goats. After being attacked in her camp by orcs, Sifa runs to town to find Ka-bes. But in doing that, she starts a series of events that will change her and Ka-bes’s lives.

I liked Sifa. She was your typical teenager and definitely acted like it in the book. She got herself into some hairy situations. She also got herself out of the same situations. She also had a no soul left behind mentality and went against the wishes of the people she was traveling with. I could see why they were objecting. But I could also see why she was going out of her way to rescue those people. I mean, one of them was her mother so…yeah, I get it.

I felt bad for Ka-bes. She didn’t have the easiest time in the book. There were some times where I wanted to smack Sifa for leading Ka-bes on that journey. But Ka-bes did end up reconnecting with someone who I wasn’t expecting her to. I want to say romance but there wasn’t even a little hint of romance. But I can imagine, can’t I?

Gartan was in this book. I was so excited when I saw that. He is one of those bad guys that you love to hate!! He was very,  very bad in this book. Very bad. I almost didn’t feel bad for what he did to Dyuh Mon at the end of the book!!

The Shepherd Girl’s Necklace is one of those fantasy’s that you will not forget soon after reading it. Sifa was a pale skin, blue-haired, blue eyes (with rectangle iris’) girl who is unaware of her heritage. As with the other books, there are magic casters. Ka-bes can manipulate air and water. There are also various forms of demons that Sifa and her friends battle throughout the book. I loved it!! I enjoy it when an author is bound to one type of fantasy. Makes for a better read.

The end of The Shepherd’s Girl Necklace was not what I thought it was going to be. I expected slaughter but instead got a twist that I didn’t see coming. I also did not see what Gartan did coming either. I got a teeny-weeny bit grossed out. Other than that, I was pretty happy. The ending did make me wonder what is going to happen next. I can’t wait to read the next book!!

My Summary of The Shepherd’s Girl Necklace:

I enjoyed reading The Shepherd Girl’s Necklace. It had everything I like about fantasy rolled into one book. It had a great plotline. It also had very memorable characters that stay with you after the book ends.

Why: Violence. Some mild language and no sex

I would like to thank Watson Davis for allowing me to read and review The Shepherd Girl’s Necklace.

All opinions stated in this review of The Shepherd Girl’s Necklace are mine. I also received no compensation for this review.