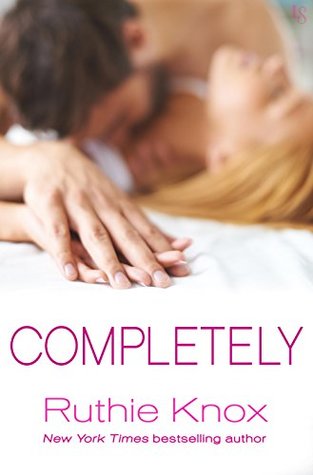 Where you can find Completely: Barnes and Noble | Amazon

Beneath her whole “classic English beauty” appearance is an indomitable spirit that has turned Rosemary Chamberlain into something of a celebrity mountain climber. But after an Everest excursion takes a deadly turn, Rosemary is rescued by her quick-thinking guide, New York native Kal Beckett. Rosemary’s brush with death brings out a primal need to celebrate life—and inspires a night of steamy sex with the rather gorgeous man who saved her.

The son of a famous female climber with a scandalous past, Kal Beckett is still trying to find himself. In the Zen state of mind where Kal spends most of his time, anything can happen—like making love to a fascinating stranger and setting off across the world with her the next morning. But as their lives collide in the whirlwind of passion that is New York City, the real adventure is clearly just beginning. . . .

I have not read a lot of books with hiking Mount Everest as a focal plotline focus. So when I read the blurb for Completely, I had to download it. Since I had read Madly, I figured that Completely would be good. Add in the Mount Everest angle, and I felt that the book would be gold. Saying that I was disappointed was an understatement.

The plotline of the book was OK. I felt that the book lost steam about halfway through. Everything up to the middle of the book was great. Rosemary’s enthusiasm for hiking Mount Everest came off the pages. That enthusiasm was carried even through the disaster that killed Rosemary’s friends. Then she and Kal slept together and bam, the book lost steam. It seemed to falter when they were in NYC and were trying to figure out what they had. It did pick back up when Rosemary got the go-ahead to interview on Kal’s mother.

While this book is a romance, it didn’t come across like that to me until the end. Both characters were lukewarm with each other. They also were second-guessing their feelings for each other. That drove me crazy when reading. I didn’t see any sort of relationship with them other than friends with benefits until the end of the book. Even then, their relationship came across as forced.

Like I said above, I liked Rosemary’s enthusiasm for scaling Mount Everest. I just wished that she showed that same enthusiasm for her daughter. I was very bothered by the lack of feelings that she seemed to have for her daughter. Her self-exploration in the middle and end of the book was a nice thing to read. Her near scare on Mount Everest gave her the scare that she needed. She should have known that it is impossible to have a pregnancy result within a couple of days of having sex. Even with her periods being out of whack, she should have known that. So taking a pregnancy test so soon afterward was, in my mind, for Kal’s benefit.

Kal was too Zen. I liked that he was laid back but he was almost too laid back. His laid-backness is was almost cost him a relationship with Rosemary. He also felt flat and almost…dull. I don’t know, I can’t explain how I felt when I read his scenes in the book. His scenes with Rosemary were very tepid too.

Like the characters, I felt that the sex was lacking. I didn’t get the connection from it as I do with other books. What I did like is that the author chose to make it not as graphic as some romance novels. The sex scenes were written very well. But I felt that an important connection was missing on my end.

I didn’t have any complaints other than taking the pregnancy test 3 days after having sex.

The end of the book did seem rushed. I felt that the decisions that were made were done on a whim and not thought through. If I had to take stock on fictional characters staying together, I would say that Rosemary and Kal would lead the list. I didn’t get a sense of everlasting love from them.

My Summary of Completely:

I didn’t care for Completely. While I enjoyed the plot, for the most part, I felt that the characters and their romance were tepid. It was that tepidness and the fact that I could not connect with either main character that shaved points off of my review.

Will I reread: No (but I will reread other books by the same author)

Will I recommend to family and friends: No (but I will recommend other books by the same author)

I would like to thank Ruthie Knox, Random House, Loveswept, and NetGalley for allowing me to read and review Completely