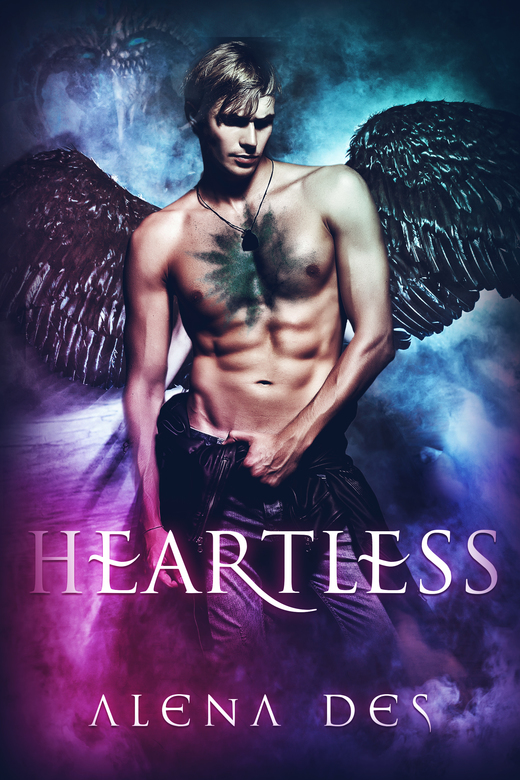 Where you can find Heartless: Amazon

Treason has consequences and Riley knows them all too well. He has betrayed Lucifer and now he is on the run.

As an Angel of Deception and the son of The Sex Goddess, Riley has always been reckless; and it’s finally catching up with him. With his heart engaged by the devil himself, he is slowly losing his soul, but when he meets Oriana something in him stirs. Used to women falling all over him, Riley becomes captivated when she is able to resist his charm.

The unlikely pair is thrust together while murder, intrigue, and mayhem run amok during a newly raging Vampire war. Can these two souls save each other in a world that’s crumbling around them?

Heartless is book 3 in the Kings series by Alena Des. I enjoyed Mated to the Werewolf King and The Warlock’s Nemesis, so I had high hopes for Heartless. It fell short of my expectations. I am a big Alena Des fan. I have read almost everything that she has written and is published by Inkitt. So I was a little sad when this book fell short of what I was expecting.

The plot of Heartless is a little confusing and that is why the book fell short of my expectations. If the plot had been Riley’s plotline or if it had been only Oriana’s plotline then I would have loved the book. Even if it was the two plotlines, it would have been great. It was too much with the other storylines added in. I couldn’t keep what was what separated in my head. I actually had to use the notes section on my Kindle Paperwhite to keep track of what storyline went with who. Even with that, I still think I didn’t write stuff down.

I thought that Heartless fit into the romance/fantasy/paranormal genre. The romances portrayed in the book were, for the most part, sweet. The fantasy and paranormal genre were well portrayed also. I loved the variety of creatures and situations that Riley and Oriana ran into while on their quests.

I couldn’t get enough of Riley. He was an enigma when he was first introduced in The Warlock’s Nemesis. When I saw that he was going to be the male main character in Heartless, I did a fist pump. He was hilarious in The Warlock’s Nemesis and I was expecting him to be the same way in Heartless. And he was. The poem he wrote for Oriana had me laughing until I cried. But he also had a more serious side to him. Because he didn’t have his heart, the only way he could keep himself alive was through sex. So, he had sex with any woman who was willing. But what shocked me was that he was a victim of child abuse by Lucifer. It was mentioned a few times and nothing was written about it but you could tell that the abuse was awful.

I liked Oriana but she got on my nerves during parts of the book. Her time-bending ability was interesting. She managed to change the future on at least two different occasions. And not of the better. But I did admire her tenacity in trying to find her brother, Samuel. Also, she took full responsibility for creating the Ferfox’s and was looking for a way to end them. But it was her relationship with Riley that drove me nuts. She refused to have sex with him until she somehow went to the past and changed both of their futures. Then she was all over him like white on rice. It was an interesting 180 to read.

The sex scenes were hot, as always. When Oriana finally did do the dirty with Riley, it was page burning hot. And it didn’t stop being hot after the first time. Every sex scene after that was super hot.

I did have some complaints about the book, unfortunately. The forced blow job scene with Nero and Riley was unneeded. I know that Nero wanted him and that he walked in on Riley after Riley was turned on by Oriana. It did not add any depth to the book and could be a trigger for those who had been assaulted in the past. The many POV’s also drove me nuts. If it had been Riley and Oriana, I would have been fine. But it was also Samuel and Diana along with Riley’s mother at the end. My head was spinning by the end of the book. Those two complaints are why I rated the book the way I did. Because I enjoyed everything else in it.

The end of the book was good. All the storylines were wrapped up. What I liked, though, is that there was a small cliffhanger in the epilogue. The small cliffhanger makes me wonder if there will be another book in the Kings series. If so, I can’t wait to read it!!

3.5 stars (will be rounded up to 4 on Goodreads and Amazon)

My Summary of Heartless:

Heartless is a fun, quick read that features angels, warlocks, and vampires. There is a couple of scenes where that could trigger people, so take care while reading it. I also had a small complaint about too many POV’s. Other than that, a great read!!

Will I recommend to family and friends: Yes but with a warning about the scenes that could trigger people