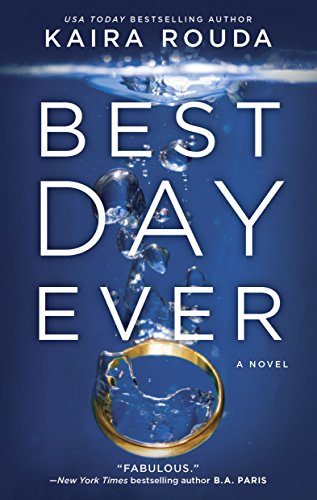 Where you can find Best Day Ever: Barnes and Noble | Amazon

“I glance at my wife as she climbs into the passenger seat, and I am bursting with confidence. Today will be everything I’ve promised her…and more…”

Paul Strom has the perfect life: a glittering career as an advertising executive, a beautiful wife, two healthy boys and a big house in a wealthy suburb. And he’s the perfect husband: breadwinner, protector, provider. That’s why he’s planned a romantic weekend for his wife, Mia, at their lake house, just the two of them. And he’s promised today will be the best day ever.

But as Paul and Mia drive out of the city and toward the countryside, a spike of tension begins to wedge itself between them and doubts start to arise. How much do they trust each other? And how perfect is their marriage, or any marriage, really?

Forcing us to ask ourselves just how well we know those who are closest to us, Best Day Ever crackles with dark energy, spinning ever tighter toward its shocking conclusion. In the bestselling, page-turning vein of The Couple Next Door and The Dinner, Kaira Rouda weaves a gripping, tautly suspenseful tale of deception and betrayal dark enough to destroy a marriage…or a life.

Ever have a title to a book that sticks to you because it reminds you of something/someone? Best Day Ever is such a title. When I first saw it, Spongebob Squarepants song “Best Day Ever” started going through my head and stuck. So now, instead of being disturbed by the title, all I can think of is the little yellow guy singing that song.

Actually, thinking about it, this song does seem to fit Paul Strom and Best Day Ever perfectly.

Best Day Ever fits the mystery/thriller genre. This book has a way of stringing you along, making you think that you know what is going on. Then, BAM, the twist comes and you have to rethink what you read. I, for one, was shocked when certain events happened. But, if you go back and read the book again, there are subtle hints about what is going on and what will happen. Very subtle hints that were hard to catch the first time through. That is what made this book fantastic in my eyes.

The plot of Best Day Ever is a man taking his wife on a much-needed weekend away at their lake house property. But there is a strange tension between them from the minute they start driving. I began to notice that things were not quite right with Paul around that time too. What sealed the deal for me was when he was talking about the drive to their house. There was a curve that you had to hit the brakes for. He made the comment that it wouldn’t take much not to hit the brakes and that the lake would be a great place to hide a body. Talk about total creepiness!!!

I thought Paul was off from the first chapter. He seemed too good to be true. The way that Mia acted around him also made me a bit leery of him. For someone who was so in love with his wife, he didn’t act it at times. I also had a feeling that her “special gift” that was on the dashboard wasn’t something good. The more the book went on, the more Paul started to become more sinister. His love for his boys turned from something great to something that was obsessive. Same thing with Mia’s trust fund that her father set up for the boys. Still, I was surprised at how evil he was and how he blamed his childhood for him being the way he was.

I am going to admit, I didn’t like Mia at first. I couldn’t understand why she was so indifferent to Paul and seemed to be baiting him. At the same time, my guard was up because I knew something wasn’t right. But the more stuff that was leaked the more I realized that something was up with their marriage. I was shocked when everything went down at the cottage. I wanted to bring her out of the book and apologize to her for judging her like I did.

While Mia and Paul didn’t have sex, it was mentioned a few times in the book. Paul seemed to think that he was a stud with women lined up. Because the book didn’t go into his relationships, I am going to go out on a limb and say that he wasn’t such a stud. That it was all in his head and he actually was horrible in bed. That the women stayed because he paid for everything. Well, Mia stayed because, at one point, she loved him.

The end of the book was not what I expected. There is a happy ending but it is overshadowed by Paul. I felt so bad for Mia because well…you need to read the book.

My Summary of Best Day Ever:

Best Day Ever is a psychological thriller that took me on a rollercoaster. I didn’t know what was going to go on from chapter to chapter. I loved it!! This book had me glued to the pages and gave me the chills while reading it.

Why: Violence, language. There are sexual innuendos but nothing graphic is ever written. There is also a very graphic scene where a woman is beaten.

I would like to thank Kaira Rouda, Graydon House, Harlequin and NetGalley for allowing me to read and review Best Day Ever