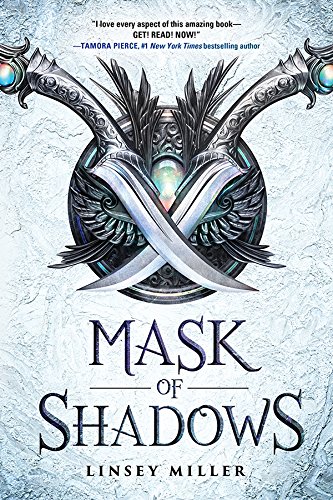 Sallot Leon is a thief and a good one at that. But gender fluid Sal wants nothing more than to escape the drudgery of life as a highway robber and get closer to the upper-class―and the nobles who destroyed their home.

When Sal steals a flyer for an audition to become a member of The Left Hand―the Queen’s personal assassins, named after the rings she wears―Sal jumps at the chance to infiltrate the court and get revenge.

But the audition is a fight to the death filled with clever circus acrobats, lethal apothecaries, and vicious ex-soldiers. A childhood as a common criminal hardly prepared Sal for the trials. And as Sal succeeds in the competition, and wins the heart of Elise, an intriguing scribe at court, they start to dream of a new life and a different future, but one that Sal can have only if they survive.

I was pretty excited to read Mask of Shadows. When I first read the blurb on the NetGalley posting, it caught my interest. The last fantasy novel I read with a genderfluid character was The Farseer/The Tawny Man/The Fitz and The Fool series with The Fool being the genderfluid character (and before anyone asks, I have read all of those series plus 2 that aren’t listed).

I did think that the audition was a little reminiscent of The Hunger Games….but only, and stress only when the members of The Left Hand told them that it was a free-for-all. Once the auditioners were whittled down from 23 to 8, the free for all ended and they started to be eliminated by The Left-Hand members or the remaining people were disqualified. Any similarities to The Hunger Games were ended. I mean, I read The Hunger Games and they battled it out to the last person (well, last two people in Katniss and Peeta’s case). Not here. The Left-Hand members decided who was going to be Opal and let the remaining two people (in this case, it was referenced that there were more at previous auditions) go.

The masks kinda bothered me, though. I don’t like masks. I have a phobia about things covering my face and even reading about them skeeved me out. They had to eat with those things on and I can only imagine what the insides looked like….puke. So yes, I spent almost the whole book being grossed out and praying that the masks will go away…lol.

I also liked the romance between Elise and Sal. It was sweet and totally forbidden. I actually had a huge smile on my face during those scenes. Sal really had no clue on how to act because Elise was an Erland and he/she/they hated the Erlands with a passion because of what happened to his/her/their homeland. I also liked Elise’s personality. She was spunky and she definitely not afraid to stand up for who and what she believed in.

The main plot, the audition, ended the way I thought it would (giving nothing away). But the secondary plot about Sal and her/his/their obsession with getting even with the Erland’s took a very surprising, and sad, turn. Want to find out….read the book.

The end of the book was definitely a cliffhanger. As much as I dislike cliffhangers, this one worked and I really can’t wait for book 2!!

How many stars will I give Mask of Shadows: 4

Why: I enjoyed reading this book and it definitely kept me engrossed.

One thought on “Mask of Shadows by Linsey Miller”