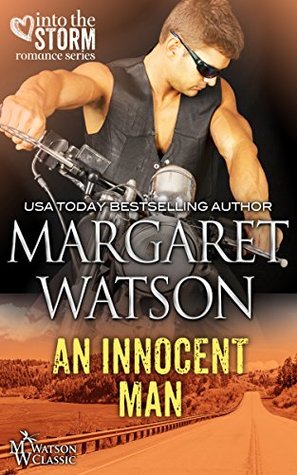 Where you can find An Innocent Man: Barnes and Noble | Amazon

Twelve years ago, Connor MacCormac roared out of the small town of Pine Butte on his motorcycle, vowing never to return. The town’s bad boy had been accused of a despicable act, and everyone believed he was guilty.

Now he’s back, and to her shame, Sarah Wesley is still infatuated with the brooding loner – the man who abandoned her sister to die. Connor is determined to expose Pine Butte’s hidden secrets so he can put the past behind him and move on. But he hadn’t counted on Sarah Wesley. The teenager he remembered has grown into a beautiful, accomplished woman. A woman who seems to want him as much as he wants her.

He’d sworn he was done with Pine Butte and its citizen. But will he be able to leave Sarah behind?

I have read some books that have been pretty heavy subject wise. So when I got to An Innocent Man on my review list, I breathed a sigh of relief. I have reviewed a few books by Margaret Watson in the past. They have always been enjoyable so I was all set to enjoy An Innocent Man. Oh boy, did I enjoy it!!

An Innocent Man is about one man’s determination to find out the truth about what happened to his father. He is also going there to get justice on the townspeople who wronged him years ago. One of those people is Sarah Wesley, the town’s NP. Sarah has hated Connor for years. She blames him for the death of her sister, Barb. So wasn’t she surprised when he turns up in her clinic after being in a bad motorcycle accident. I was hooked from reading the blurb. When I actually got to reading the story, it was so much more.

An Innocent Man is most definitely a romance novel. It is a romance novel with a small dash of mystery and intrigue thrown in. I was pretty happy with the romance, even though it was “Instalove“. Connor and Sarah fell in love within a week. They also fell in love while dodging her shady uncle and cousin in the secondary storyline. Speaking of that storyline, it was a bit predictable but enjoyable to read.

I liked Connor. His reasons for leaving Pine Butte were awful but he needed to do it. I felt that his quest to find out exactly what happened to his father was needed so he could finally get closure. His distrust of the residents of Pine Butte was well founded too. He was not treated very well by them. But he found out that people can change and memories cannot always be correct. I do think that he should have been more upfront with Sarah about his career too. That was actually a surprise for me. I was not expecting it.

Sarah kind of annoyed me at the beginning of the book. She came across as a bit whiney about her being stuck in town. That lasted until she treated Connor. Then I started to like her. She put aside her personal feelings about him. She let him stay at her house. She got involved with his investigation. She showed Connor that the residents of Pine Butte didn’t hate him as he thought. She also helped Connor heal. When Connor revealed his secret to her at the end of the book, I would have been angry too.

The sex scenes in An Innocent Man were sweet. They also were not super graphic, which I enjoyed. You could see the feelings between Connor and Sarah come to life when they had sex. I enjoyed reading them!!

Other than Sarah kind of annoying me at the beginning of the book, I had no complaints about An Innocent Man.

The ending was pretty standard. All plotlines were resolved and the main characters were able to have a HEA. I do wish that there was an epilogue that fasts forward to the next year. I would have liked to see where Sarah and Connor were in their lives.

Summary of An Innocent Man:

An Innocent Man is a fast-paced romance that has a bit of intrigue and mystery in it. I enjoyed reading it, even if it was a bit predictable. This is a book that I would read while at the beach or pool.

I would like to thank Margaret Watson and Dragonfly Press for allowing me to read and review An Innocent Man.

4 thoughts on “An Innocent Man (Into the Storm: Book 2) by Margaret Watson”