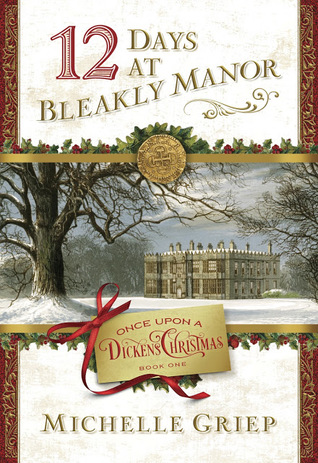 Series: Once Upon A Dickens Christmas

Where you can find 12 Days At Bleakly Manor: Barnes and Noble | Amazon

When CLARA CHAPMAN receives an intriguing invitation to spend Christmas at an English manor home, she is hesitant yet compelled to attend—for if she remains the duration of the twelve-day celebration, she is promised a sum of one thousand pounds. That’s enough money to bring her brother back from America and reinstate their stolen family fortune. But is she walking into danger? It appears so, especially when she comes face to face with one of the other guests—her former fiancé, BENJAMIN LANE.

Imprisoned unjustly, Ben wants revenge on whoever stole his honor. When he’s given the chance to gain his freedom, he jumps at it—and is faced with the anger of the woman he stood up at the altar.

Brought together under mysterious circumstances for the Twelve Days of Christmas, Clara and Ben discover that what they’ve been striving for isn’t what ultimately matters. What matters most is what Christmas is all about . . . love.

It has been a long time since I have read a Christian book and even longer since I have read a Christian mystery. So when I saw 12 Days at Bleakly Manor offered on NetGalley, I decided to download it. I was a bit leery on reading it because I have been burnt by Christian books in the past. I have found that some books can be a bit preachy and that is a turn-off. So I usually pass on them. Don’t get me wrong, I have found a few gems that I enjoyed but for the most part…nope.

The plot of 12 Days at Bleakly Manor was very simple. Clara was to go stay at a manor over the Christmas holiday with several other guests. If she can hold out for the 12 days, she will receive a lump sum. That will be enough to bring her brother back from America. Sounds simple but it wasn’t. There were several roadblocks thrown in the way. A big one is the reappearance of Benjamin, Clara’s fiancé who had disappeared on their wedding day.

What I liked about this book was the Christianity was not pushed on the reader. You were aware of it and it was mentioned a few times in the book but it didn’t overwhelm the story. It wasn’t preachy at all. Which I enjoyed.

I liked Clara. She had to deal with so much over the past year. Her fiancé disappeared on her wedding day. Then, she finds out that her family’s fortune is gone and her brother has to go to America to try to get it back. She moved in with her aunt and was barely keeping things together when she got a mysterious invite. If I were invited to a strange manor with people who I don’t know from a hole in the wall, then I wouldn’t go. But the incentive, $1k pounds, was what drew Clara there. What she wasn’t counting on and what shocked her was Ben being there.

I felt awful for Ben. When he is introduced into the story, he has been in jail for over a year. He is serving time for stealing Clara’s fortune….something that he didn’t do. So when the warden says that he has a deal for Ben, he takes it. The deal: Stay 12 days at Bleakly Manor. If he completes the 12 days, then he gets a pardon. If not, he goes back to jail and is shipped to Australia on the first transport ship that comes into the harbor. He was told that Clara sent him to jail, that Clara was to blame for his incarceration. Imagine his surprise when he finds out that Clara is there…

I did find it odd that an unmarried woman in that era would be allowed to go unchaperoned to a house. A house where the majority of the guests are men. In my readings for that era (Victorian), that would be enough for a girl or woman to be ocasterized from the ton. So, yes I did find it very odd and going against what I know about that era. Other than that, I didn’t have any other complaints about the book.

I loved that the author included what the 12 Days of Christmas included at the end of the book. Few people, myself included, know what the English do (or used to do) for the 12 days of Christmas. I found it fascinating.

The end of the book was your typical HEA. There was a very sad scene where the mystery benefactor was revealed. But other than that, typical HEA.

Summary of 12 Days at Bleakly Manor

12 Days at Bleakly Manor was a great read. A mystery with Christian overtures, I got sucked into the plot. The Christian theme was not overpowering and the mystery kept you in the dark until the end of the book. I did have an issue with an unmarried woman being alone in a house with men. It did not go with the era that the book was written with. Other than that, it was a story that I enjoyed reading and I cannot wait to read the 2nd book.

Why: Some mild violence, no language, and no sex

I would like to thank Michelle Griep, Barbour Publishing and Shiloh Run Press for allowing me to read and review 12 Days at Bleakly Manor