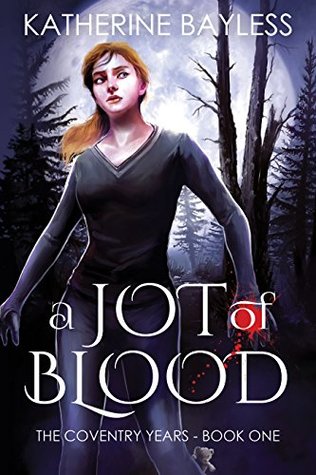 Title: A Jot of Blood

Where you can find A Jot of Blood: Barnes and Noble | Amazon

Adolescence is hard enough, but add magic to the mix and things have a way of getting complicated in a hurry. Even at Coventry Academy, one of the best schools in the world for the magically inclined, some ‘gifts’ mean nothing but trouble. What do you do when anything—your clothes, your food, the accidental brush of a fingertip—can instantly reveal the dark secrets of your closest friend … or, worse, a mortal enemy?

Coventry may have been Lire Devon’s haven since she was a little girl, but there are some who despise and even fear her rare clairvoyant power. Now, after years of simmering resentment, Lire’s nemesis, a sorceress with beauty, status, and well-connected friends, has thrown down the gauntlet. The challenge will push Lire’s resourcefulness to its limits and beyond—to a place where arcane dangers lurk and the price of power is knowledge too excruciating to bear.

Warning: The contents of this book include one surly werewolf, a snarky invisible prankster, and enough indelicate language to make a succubus blush.

This was a book that grabs you from the beginning. Lire being a clairvoyant was different from other books in the YA paranormal genre. I haven’t read a book yet where the main character was clairvoyant and where she was feared for it. Speaking of fear, I thought that it was great that the author played up people being afraid of Lire and her power. Afraid to the point where she was segregated from the other students to protect her and them. It made the book dark.

I liked Lire. I also felt bad for her at the same time. Not only did she have to deal with the fallout of her gift but she was singled out at school. She was forced to live in a room where a warning hung on the door. She had to deal with teachers who singled her out by making her sit at the back of the class at orange desks. She also had to deal with bullies who made her life miserable. She dealt with it because she didn’t want to rock the boat. That was until she met Cal and Zach and they showed her that there was so much more to school and life.

The romance between Cal and Lire was very cute but it took a while for me to even figure out that he liked her. I knew that Lire like him but I saw almost no hints from him. But, there was a slight hint of Zach liking Lire and Lire liking Zach. They had so much chemistry together that I was almost hoping that the author would go there.

The variety of paranormal beings that went to the school was amazing. You had everything from Glindarian witches to Occultom. In the paranormal books that I have read, the story has the stock paranormal people. Which are witches, werewolves, vampires, and elves. In this book, you have them and they included over paranormal beings too. Which added more depth to the story.

The storylines in the book were great also. The main storyline was Lire, Cal, and Zach doing some dangerous stuff.  They were also battling bullies which were neat. But the secondary storyline with the missing werewolves made the book. I didn’t see what was coming because the author made the attention on Lire, Cal, and Zach for the first half of the book. So I was surprised when everything happened towards the end of the book. I was very surprised when the bad guy ended up being the last person I thought.

The end of the book was good and I was pretty happy with everything that happened. What I liked was the epilogue and the hint of book 2. I am hoping that book 2 is coming out soon because I need to know what is going on with Lire.

My Summary of A Jot of Blood: 4 stars

A Jot of Blood is a fast-paced paranormal young adult book that engrossed me while I was reading it. I will warn you though, there is crude language in this book. So if you are offended by swearing…I wouldn’t read it. I would recommend this book to anyone over the age of 16 and to anyone who can appreciate the snarky humor in the book.

Why: Language, mild violence. No sex scenes but Cal and Lire do kiss at one point in the book.

I would like to thank Scry Media, Katherine Bayless and NetGalley for allowing to read and review A Jot of Blood.

One thought on “A Jot of Blood (The Coventry Years: Book 1) by Katherine Bayless”