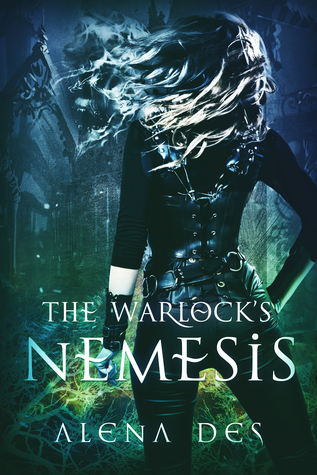 Where you can buy The Warlock’s Nemesis: Amazon

The world is devastated by a deadly virus which threatens humans’ very existence. In an alliance with the humans, the witch coven sends Alice as a healer. With resources stretched thin, and with no information on the cause of the sickness, what Alice can do is limited. However, whoever is behind the creation of the virus has another target in mind. Things take a sinister turn as Tannon, the powerful warlock faces his greatest nemesis yet. Will the identity of his nemesis be his downfall? Take this journey as Alice and the warlock join hands to find the solution to the extinction of all species, and fight the enemy who is so far away, and yet so near at the same time.

I took a chance of deciding to review The Warlock’s Nemesis. I had reviewed Mated to the Werewolf King. While I liked it, I had some issues with the plot and too many characters POV. But, after reading the blurb and seeing that it was about Tannon and Alice, I decided to give it a go. I am glad I did because I enjoyed  The Warlock’s Nemesis a lot.

I liked the plotline. Not only did it have Tannon but it had Alice, who was the healer in Mated to the Werewolf King. The fact that Alice was both healer and spreader of the virus was fantastic. The author did a great job of hiding why she was both. I was shocked when it was revealed because it was so obvious. But what shocked me happened after that reveal. I wasn’t expecting Alice to turn into that. I was a bit shocked.

Tannon was a little hard to read at first. To be honest, I thought that he didn’t like Alice in that way by the way he acted at the beginning of the book. The way he kept her at arm’s length and never showed any emotion was very telling. So I was a bit surprised when the book switched to his perspective and he had these feelings for her. A total switch from the beginning of the book and a sudden one at that but it made no difference in how I viewed the book. Just confused me more than anything.

The storyline with Tessa and Tannon’s other girlfriends (for lack of a better word) was awful. I can see why Tannon was so upset. I can see why Tessa did what she did, though. She was protecting her twin.

The sex scenes between Alice and Tannon was enough. Not too graphic but graphic enough for you to understand what was going on. With everything else that was happening in the book, I appreciated that. If the author had gotten graphic with the sex, it would have been too much.

If I had a complaint, it would be that I think the book should have ended when Alice remembered who she was and who Tannon was to her. Anything after that didn’t add to the book. If it had ended there, I would have given the book a higher rating. Other than that, I enjoyed the book.

Now, I know I didn’t go into everything that happened in the book. If I did, this review would be a novel. I decided to only highlight the plotlines that I liked and the sex. If I had explained everything else, I do think I would be giving away some major spoilers.

The ending was one of those sunshine and roses endings. Except for one part. I would love to know…..read the book to find out!! I can’t wait to read book 3. Usually, I can get a handle on who the book will be about. Not this time. Guess I am going to be surprised.

My Summary of The Warlock’s Nemesis: 4 stars

The Warlock’s Nemesis is a fast-paced fantasy romance that was enjoyable to read. This book was a pleasure to read. It was engaging and had a great plotline. It also had well-rounded characters. My only complaint is that the book did go on a tad longer than what it should have. Other than that, I loved it.

Why: Violence, sex (but not graphic) and language

All opinions expressed in this review are mine and mine alone.

2 thoughts on “The Warlock’s Nemesis by Alena Des”