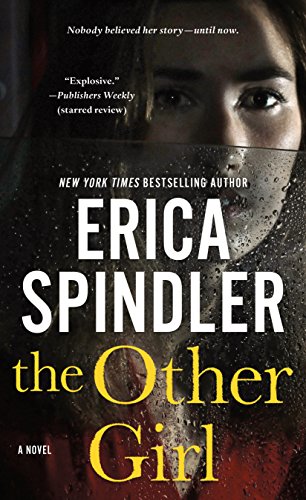 Title: The Other Girl

Where you can find The Other Girl: Barnes and Noble | Amazon

From the NYT bestselling author comes a chilling new thriller about a ritualistic murder of a college professor that sends a small town cop back into the trauma she thought she’d put behind her.

Officer Miranda Rader of the Hammond PD in Louisiana is known for her honesty, integrity, and steady hand in a crisis—but that wasn’t always so. Miranda comes from Jasper, just south of Hammond, a place about the size of a good spit on a hot day, and her side of the tracks was the wrong one. She’s worked hard to leave the girl she used to be behind and earn respect in her position as an officer.

However, when Miranda and her partner are called to investigate the murder of one of the town’s most beloved college professors, they’re unprepared for the gruesomeness of the scene. This murder is unlike any they’ve ever investigated, and just when Miranda thinks she’s seen the worst of it, she finds a piece of evidence that chills her to the core: a faded newspaper clipping about a terrible night from her long-buried past. Then another man turns up dead, this one a retired cop, and not just any cop—Clint Wheeler, the cop who took her statement that night. Two murders, two very different men, two killings that on the surface had nothing in common—except Miranda. 15 years ago.

And when her fingerprints turn up at the scene of the first murder, Miranda once again finds herself under the microscope, her honesty and integrity doubted, her motivations questioned. Alone again, the trust of her colleagues shattered, Miranda must try to trust the instincts she’s pushed down for so long, and decide what’s right—before it’s too late.

I was really excited to read The Other Girl when I read the blurb on NetGalley. I mean, it was a murder mystery with a heroine who wasn’t perfect. So when I got the email stating that I was accepted, I was pretty excited. I love a good murder mystery with a strong female heroine but I was also a bit cautious in my excitement. See, I have been burned by books that have excellent blurbs but the story wasn’t that great. I am happy to report that The Other Girl lives up to its blurb.

I felt a little bad for Miranda but at the same time, I couldn’t understand why she didn’t leave Hammond if she was regarded in such a bad light. It seemed to me that she put herself through a whole bunch of stress trying to live down her past. It was her past as a wild child who lied that came to haunt her during the murder investigation. See, Miranda (known as Randi back in the day) hitched a ride with the wrong person and something terrible happened to her and the girl who was with her. She managed to escape but when she told the police, they didn’t believe her and one of the police officers openly mocked Randi. That night, she decided that she was going to turn herself around. Which she did and all was right in her world until this murder, 15 years later.

I can tell you now that I knew that the chief was dirty, as was the father of the murder victim. The father was so shady acting it wasn’t funny and the chief was way to quick to point fingers at Miranda. Way to quick and that sent up a red flag early in the book. Not going to get more into it and if you want to know what I am talking about….read the book.

The romance between Jake and Miranda was cute but honestly, I didn’t think it was needed. Don’t get me wrong, I am all for the main character getting laid but I didn’t think that it was truly needed in this book. It did show that Miranda had a softer side but I think that was shown in her interactions with Summer.

Speaking of Summer, I had a clue about who she was about halfway through the book. I thought that her whole storyline was incredibly sad and I really wasn’t surprised when things went down the way that they did. I did admire her feelings of friendship for Miranda…regardless of what happened later in the book.

The end of the book was pretty standard. I will say that I wasn’t surprised at who the killer was. But, what I did enjoy was that all the storylines got tied up and resolved. I was extremely happy about that because things actually got resolved. I do hope that the author chooses to write more with Miranda’s character. I would truly enjoy reading another book with her as the main character.

How many stars will I give The Other Girl: 4

Why: While I figured out certain key elements of the story about halfway through the book, the author did a great job of creating a thriller that kept me on the edge of my seat. I truly enjoyed reading the book.

Why: Sex, violence language. Also talk of rape and use of date rape drug

One thought on “The Other Girl by Erica Spindler”