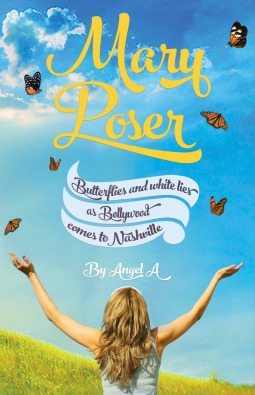 The recipe for a warm and humorous story…

In a modest bowl of Nashville, gently place a girl who is Country music, Bible belt, and a Steakhouse foodie.

Then add a surprise portion of exotic and handsome Anglo-Indian, who is a passionate Bollywood director, vegetarian and Hindu.

Stir vigorously on a bed of intense attraction.

At first, the ingredients will seem to clash and separate.

Include a dollop of jealous boyfriend and a meddling mother.

Splash in a serving of fun and mischievous friends. Keep stirring…

Add a dash of a crazy aunt and a minister father to keep the flavors working together.

Sprinkle in even more complicated family members to taste.

The secret ingredient that cuts through the sweetness is a final layer of shocking revelation that adds a surprising depth of flavor.

Finish with a twist of ‘Oh My God! Is she really going to do that?’.

Serve as tasty bite-size chapters in a novel dish of mayhem and madness with a side of Country music and Bollywood dancing.

I couldn’t get into this book, which is very unusual for me. I didn’t love this book but I didn’t hate it either. I was kinda “eh” while reading it. Which made me a little sad because I really wanted to get into the book. I like most of the characters and thought the storyline was great. It just didn’t hold my attention.

I didn’t like Mary at first. She really was kind of a pushover and there were certain points in the book where I kinda wanted to go into the book, shake her and yell “Why!! Use your brain!!” But, seeing that this is a fiction book, I just settled for humphing grumpily at my Kindle. I think that she could have had a better choice in friends too. Her family, though, she didn’t have a choice and they were all kinds of crazy. Oh, and let’s not forget that she was immature. There were certain scenes where I was like “Really, you could have handled that better”. But by the end of the book, I did like her. She came into her own and I was like “You go girl”

I actually felt bad for Simha. He fell for a girl who was the polar opposite from him and who kept jerking him around the entire book. Honestly, I would have said “See ya” after the scene where she bolted after they had sex. But he still kept on trying. Sending her gifts, texting her all the time, making a Bollywood musical in Nashville so he could be near her. He was too much, even for me.

The secondary characters left a bad taste in my mouth. Mary’s mother was a homophobic, racist Christian. Her brother was the same but on a lesser level. Her father had no backbone and acted like Jerry Lewis to break up arguments. Her best friend was a jealous witch who was all about herself. Her fiancé was self-centered and racist. Actually, the only secondary characters I liked were Alice and Erin. But really, having Alice say “bro” all the time got very tiring to read. Also, having the characters leaving the g’s off of words “Starvin’, such as, was great to create the accent but that too got tiring to read.

I did like the sex scene between Simha and Mary. It showed the full depth of their feelings for each other (even if Mary wasn’t willing to admit it). All I have to say is cosmic sex rocks….lol. That scene is also why I kinda hesitated on slapping a Christian label on this review. But seeing how heavily God was mentioned, I felt that a Christian label was appropriate.

The whole Bollywood angle fascinated me, along with the mentions of the Hindu religion. Believe it or not, but I have never seen a Bollywood movie but after this book, I am going to find one and watch it. I have a feeling that it will be right up my alley. Also, I didn’t know much about the Hindu religion and thought that it was awesome that the author had Simha explain the aspect of the religion to Mary. What I liked were the changes that Mary made in her life. Taking up yoga and going vegetarian was a pretty significant lifestyle change. I just wish that she had the sense to do the other changes earlier in the book.

The end of the book was insane. Everything blew up at once and it was kind of hard to keep track of things. But I liked it, it was very interesting and definitely kept you on your toes reading wise

How many stars will I give Mary Poser:  3

Why: I kinda went back and forth on giving either a 3 star or 4-star rating to this book. While I loved the romance aspect of it, I felt that the other parts of the book brought the book down. I couldn’t get past Mary’s mother and that is what caused me to lower the book down to a 3-star rating. If she had been toned down a tad, then I think I would have given the book 4 stars.

One thought on “Mary Poser: Butterflies and White Lies as Bollywood Comes to Nashville by Angel A.”