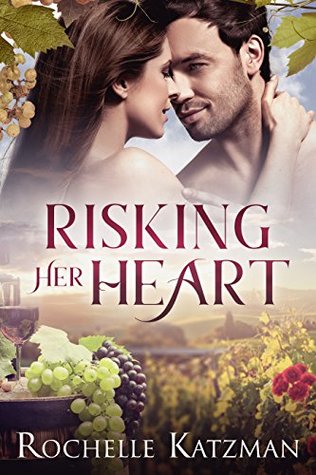 Where you can buy Risking Her Heart: Barnes and Noble | Amazon

He’s ruthless in business and in bed.

He’ll sleep with you, rip your heart out, and never commit.

He’ll charm you, seduce you, and set your world on fire.

He’ll make you feel as if you’re his woman then claim you’re only friends.

Friends, as in call once in a while. Not friends with the potential of more.

He’s the exact type of man Livvie needs to stay away from, especially with her destructive pattern of dating narcissistic men who refuse to be monogamous.

Until fate forces them to meet.

Livvie wins a one-week stay at Morganthal Winery, owned by Drake Morganthal. She doubts she’ll see him. And even if she does, there’s no way he’ll give a random raffle winner the time of day.

From the moment they lock eyes, their chemistry is so intense, Drake has to have her. He makes his motives very clear.

Between his delicious wines and his gorgeous body, which she craves like a drug, Livvie has to decide if she’ll spend the week in his vineyard and his bed, or if she’s strong enough to turn away a man as addictive as Drake Morganthal.

Billionaire romances are a dime a dozen. I can’t tell you how many I have read and reviewed. There were some I liked, some I loved and some that I didn’t care for. When Rochelle Katzman asked me to review Risking Her Heart, I accepted. I thought that this was going to be a run of the mill billionaire romance. I was proven wrong. Risking Her Heart was not run of the mill.

I felt awful for Livvie. She had such bad luck with relationships. Her self-esteem and confidence took a huge blow after her boyfriend of a year cheated on her. Around that time, she got fired from her job. So, yeah, she needed a change of scenery. When she won the one week stay at Morganthal Winery at a charity auction, she looked at it as a chance to heal. She also was using the vacation as a way to figure out what she was going to do from that point on. Then she met Drake and fireworks happened. Drake was exactly the type of guy that she wanted to stay away from. Except she couldn’t stay away from Drake.

I will say that I wanted to smack Drake during parts of the book. He sent such conflicting signals that I even had trouble interpreting them. He wants to be friends but everything was screaming that he wanted Livvie more than friends. When it was explained that he had severe commitment issues, I could see why he acted the way he did. He was afraid of getting hurt and he didn’t want a woman to be miserable like his mother was. What he didn’t count on was Livvie being stubborn and fighting for a relationship with him.

I enjoyed reading the romance between Drake and Livvie. I will admit that I couldn’t figure out what Drake’s feelings were for her at first. I also thought that it was only going to be about sex. The scene where they were at dinner with several clients and his mother did lay my concerns to rest. His jealousy was very palpable. If I had doubt about how he felt, the scene where Livvie accidentally called him while Zach was at her house reassured me.

What I liked about this romance was that while Livvie fell in love with Drake quickly. The author chose to have Drake wait weeks before he let Livvie know. Having the romance drawn out a little while makes the romance a little sweeter for me. It also makes for an emotional “I love you” when it is finally said.

Livvie trying to find herself after a bad breakup is something that every woman has done. I got why she was doing it and I was glad when she rediscovered her spark for writing.  I could also feel her frustration at being friend-zoned by Drake. Well, I wouldn’t exactly call it friendzoning. I mean, he would hook up with her when he ran into her. So I don’t know what I would call it.

The sexual tension between Livvie and Drake was intense. I was hoping that she would hold out on him for at least a couple more chapters. But when they bumped uglies, it was hot. Unlike other romance novels, and I see this as a big problem, the sexual tension was still there. Every single time they had sex, it was explosive. I liked that Drake talked dirty to Livvie too. Made those scenes even hotter.

I loved the ending. While I knew that something was going to happen, I didn’t expect that. Also, the epilogue was adorable. I couldn’t ask for a better ending for a book.

My Summary for Risking Her Heart: 4 stars

Risking Her Heart is a well written contemporary romance. I enjoyed reading this book. I did have an issue getting a handle on Drake in the beginning. The whole “friendzone” thing that Drake was doing to Livvie did bother me a little. Then I learned why and my annoyance turned to pity. Other than that, this was a great read!!

I want to thank Rochelle Katzman and TCK Publishing for allowing me to read and review Risking Her Heart.

All opinions expressed in this review are mine.

One thought on “Risking Her Heart: A Contemporary Romance by Rochelle Katzman”