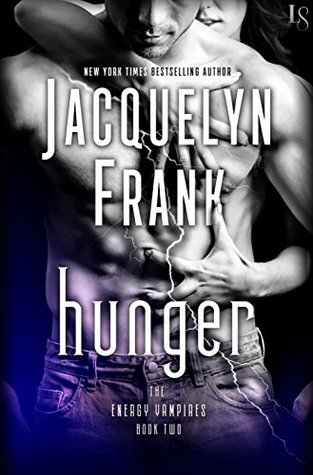 Where you can find Hunger: Barnes and Nobles | Amazon

Dark cravings and illicit bloodlust are back in a novel of forbidden love set against the backdrop of an all-out vampire war, from the New York Times bestselling author of the Nightwalkers saga.

Hunger is a fast-paced, paranormal romance with a different kind of vampires….which surprised me. These vampires take their energy from the sun and they have to take their blood from pure, clean source or risk becoming sycophants or phants for short. They are vampires who have crossed a line and have fed from unclean sources (junkies were used as an example). So, I was pretty excited to read this book. While I wasn’t disappointed, I did feel let down at points in the book.

Why did I feel let down? Well, for one, I don’t like reading books out-of-order from a series. Hunger is not a standalone book that can be read out-of-order from the series and I honestly felt ripped off when Halo was going over the history of the e-vampires with Felice. Why ripped off? Because you know that more insight was given in the first book. But that’s on me. The other reason was that I felt that the book was rushed in some parts. I would have loved to see Felice in her store or being more natural. Not coming off of heroin and being hurt.

I did like Felice, though. She had been through a lot before being taken. She had to uproot her entire life because of an abusive ex-boyfriend who was stalking her. That takes guts. Her being on heroin actually wasn’t her fault either. She was injected with it prior to Halo coming so when he fed on her, he would turn. She was so sweet and her reaction to Halo telling her about him being a vampire was priceless. I think I would have had the same reaction….lol.

Halo, I liked too. But I didn’t like the name. It reminded me too much of the game and I did like that he actually brought that up….lol. What I liked was that he had no problems letting Felice know that he was a player and that no one tied him down. He was also fiercely loyal to his queen and was determined to find the men who imprisoned Felice and himself. Not going to say who….you need to read the book to find that out for yourselves!!

The sex between Felice and Halo was beyond hot. It was page burning hot and I couldn’t get them out of my head after I finished the book. So, yeah, it stays with you….lol.

The end of the book was pretty good but I really didn’t like it. I wanted more. I wanted to see who the next book would be about (I do have my suspicions).

How many stars will I give Hunger: 3

Why: Like I said above, I felt that the book was rushed in places. But I did like Halo and Felice and thought that their romance was hot and sexy.

One thought on “Hunger (The Energy Vampires: Book 2) by Jacquelyn Frank”