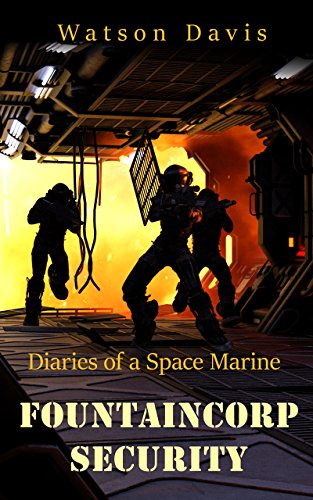 Where you can find FountainCorp Security: Barnes and Noble | Amazon

Dorothea, decorated veteran of the Martian Marines and paroled war-criminal, has a new job using her old skills, but her first mission takes off on the wrong foot. In a zombie-infested station, every mistake can be your last.

In this military sci-fi romp across the solar system, Watson Davis weaves a tale of intrigue and terror with guns and blasters blazing.

Buy this book and start reading the Diaries of a Space Marine series today!

I know that I have mentioned in other blog posts that I am a huge science fiction fan. Put it this way, I will devour any type of science fiction books. So when Watson approached me and asked me to review FountainCorp Security, I jumped on it. I had reviewed the prequel to this book, Once a Hero, and I was intrigued by Dorothea’s story. I am glad that I accepted because I enjoyed this book a lot.

Dorothea was such a flawed character. Something very traumatic happened when she was younger. It happened at the hand of a deranged Gorovitz Family member named Mercedez. It explained why Dorothea connected with Santina.  It also explained why she went out of her way rescue her on that seedy space station.

What happened to Santina was awful. There was a point in the book when she was in the 1st space station, where I wasn’t sure if she was going to be saved. So I was glad when Dorothea ignored Edmund and got her anyway. I wasn’t too surprised when she was released back into the arms of the Gorovitz Family. But I was surprised at how the events went down at the end of the book. I should have seen what happened coming and I kick myself about. It did make for a good twist in the story.

The relationship that Dorothea had with Edmund and the rest of the team was rocky at first. She was used to being in charge so for her to be the newbie on an established team did take some time to get used to. The rest of the team realized that after the mission to the Frozen Lotus (where they found Santina). Edmund, well, he didn’t trust her. But, he was quick to jump in the sack with her.

The Gorovitz Family was very interesting to read about too. They were like a Gypsy family that practiced polygamy. They were involved in some very shady stuff (not going to get into it here). I actually liked Mercedez for some odd reason. She was loyal and she was tough. I mean, she took a beating from Dorothea and lived.

The end of the book was epic. Not only because of the twist that I mentioned above but because of what happened before. It showed how tough Dorothea was. I have a feeling that this won’t be the last that we see of Santina or the Gorovitz Family. Which excites me because I can see the possibilities for a lot more books.

My Summary of FountainCorp Security: 4 stars

FountainCorp Security is a fast-paced, bloody science fiction novel. With characters that you will remember and a plotline is made for the movies, this is a book that you will have a hard time putting down.

Why: Sex (not graphic at all), language and violence

One thought on “FountainCorp Security: Diaries of a Space Marine by Watson Davis”