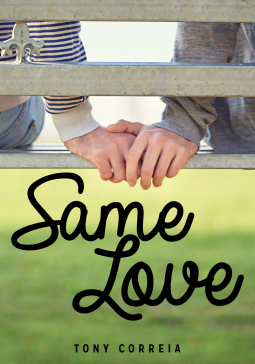 Where you can find Same Love: Barnes and Noble | Amazon

At seventeen, Adam has suspected for a while that he might be gay. His sketchbook has become full of images of good-looking men, and he isn’t attracted to any of the girls he knows. When he reveals his feelings to his devout parents, they send him to a Christian camp, warning him that there will be no room in their lives for a gay son. The last thing Adam expects is to meet someone he is deeply attracted to; unfortunately, Paul is more committed to his Christian faith than Adam is.

Adam tries to bury his attraction to Paul by concentrating on his art and his new friends Rhonda and Martin. When it becomes clear how unhappy Rhonda and Martin are at Camp Revelation, Adam and Paul are both forced to question what the church tells them about love. But with a whole camp full of people trying to get Adam to change who he is, what kind of chance do Adam and Paul have to find love and a life with each other?

Same Love is a book that tries to explore Christianity, being a teenager and being gay. It made me extremely sad because, in real life, there are such things as these Christian camps and unfortunately, there are parents who while professing to love their child will send them to these camps to be cured of whatever is considered a sin. Be it that they are gay, having sex outside of marriage, being depressed….you get the gist.

I felt bad for Adam. He was caught with his friend Mike, who is out and proud of it, shopping at the GAP. He gets home and is basically forced to come out to his mother and father. I couldn’t get over how his Christian parents treated him after he came out. His father didn’t talk to him and his mother treated him like he was dirt on her shoes. I was left shaking my head at their interactions after his coming out and during his time at the camp.

I really don’t get why Adam had such a crush on Paul. Paul really didn’t give me any indications, other than singling Adam out a lot, that he liked boys. When Adam did confess his feelings for Paul, I was a little surprised that he returned them. And then I was surprised when he turned around and dumped Adam a few days later because he wasn’t sure about what he felt for him.

I was also a little surprised about the Bishop. I was actually thinking that the book was going to go in a totally different direction and then the Bishop made his confession. That yes, he was gay but he went to see a doctor specialized in turning gay people straight and he is now married. He said it was basically “you can look but you can’t touch“. All the while, I was thinking to myself “WTH am I reading??” I knew that there were camps that did that but I didn’t know that there were real Doctors that did it and that made me sick to my stomach.

The romance between Paul and Adam was not believable, to me, and seemed somewhat one-dimensional. Besides that one talk and one kiss, all the feelings seemed to be one-sided and even when Paul admitted to being attracted to Adam.

I did think that the author did a great job of ending the storylines. I do wish, though, that there was an update on Martin. I also loved how the story ended for Adam.

How many stars will I give Same Love: 2

Why: I thought that the storyline was very interesting and I hadn’t of read a book about a gay reform camp before. But, it was the characters and some statements (comparing taking blood for diabetes to breastfeeding….which is flipping ridiculous if you ask me) that killed the book for me. I also felt that the love story between Paul and Adam was a bit one-dimensional and not at all believable, as stated above.