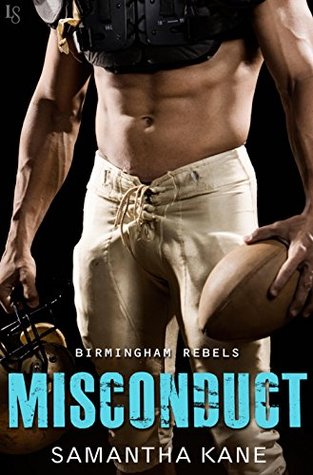 Where you can find Misconduct: Barnes and Noble | Amazon

The Birmingham Rebels play both sides of the field, proving that the hottest action isn’t always in the arena.

Rookie running back Tom Kelly loves the perks of football stardom. Men, women—there’s no shortage of companionship for a pro athlete who’s hot, young, and willing, and Tom is definitely willing. But deep down he wants a committed three-way relationship, especially if the female in the middle is Carmina de la Cruz. The undeniably sexy Army veteran may not say much, but her body speaks loud and clear.

After a traumatic tour in Afghanistan, Carmina is struggling to regain her speech and rebuild her life. More than anything, she wants to feel like a woman again. Tom may be a wholesome All-American, but he knows just how she needs to be touched—and he’s not the only Rebel who arouses her interest. With his scorching intensity, Tom’s best friend leaves her wondering if two players might be better than one.

Danny Smith is no stranger to his team’s kinky reputation. He gave in to temptation once, but he’s not going down that road again. Sure, Carmina’s curves promise pleasure, but her eyes guarantee it comes with baggage—and Danny has enough of his own. Still, giving up control can feel so good. And when it comes to everything Danny craves, Carmina and Tom make the perfect team.

I was pleasantly surprised by Misconduct. I was expecting a book that started and ended with sex. Not only was the sex sparsely handed up in the book but the sex scenes were beautifully written. I have read several ménage books where everyone was just like “group sex/sex with a man. Let’s do it”. Instead, she had Danny teetering on the edge of wanting to do it and at the same time not wanting to. I loved it because when it finally does happen (both the group sex and sex with Tom), it was explosive.

I really liked that while the sex was part of the book, the author chose to focus on the characters and their different issues instead of just having them have sex all the time. Carmina was a Wounded Warrior and was in therapy to help her relearn how to talk. Tom was sowing his wild oats and Danny had issues going back to college with the quarterback of another team. It was interesting to watch how the author had them work through their issues (well Tom banging everything in sight really wasn’t an issue).

I didn’t think that Danny or Tom would have ever crossed that threshold in the book (even though I knew it was going to happen). I really thought, at one point, that it would be just about Carmina and her sexual healing (sorry, had to throw that phrase in there). So when it did happen, I was a little surprised. Actually, a lot surprised.

Now, ménage books are normally not my kind of thing to read. They really just don’t do it for me but this book did, somewhat. Like I said, the author didn’t have the main characters humping their way across the book and I think that is what did it for me. For me, too much sex can be a bad thing.

The end of the book was what I expected. Not that I didn’t enjoy it, I did. It was just your typical HEA.

How many stars will I give Misconduct: 3

Why: Good book with surprisingly good plotlines. Just really couldn’t get into the characters or the sex.