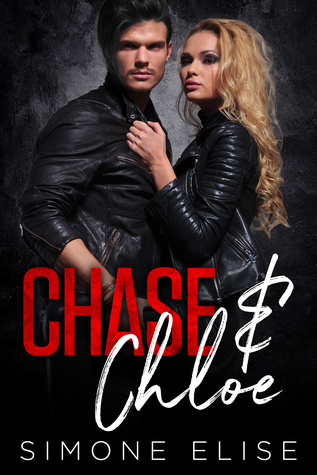 Where you can find Chase & Chloe: Amazon

Chloe’s life has never been the easiest ride, and now she finds herself in chaos and running away from home in her stolen abusive stepfather’s car. When she breaks down in the middle of nowhere, she doesn’t expect to come face to face with Chase; the eldest son of the leader of the notoriously feared Horsemen Motorcycle Club.

With nowhere to go and no one to turn to, Chloe reluctantly accepts Chase’s offer of a place to stay, despite her knowing that he can’t be trusted. This big, bad, biker can’t mean any good, can he?

A tale of romance, danger, and suspense; Chase and Chloe is a thrilling ride that you’ll find tough to slow down on…

Chase & Chloe is another Australian-based motorcycle club romance by Simone Elise. While I have loved Simone Elise’s other books, Chase & Chloe really spark my interest and I almost DNF’d the book. It was a combination of two immature main characters and a plotline that made me scratch my head at times. Also, I didn’t like that other POV’s were added to the book other than Chase’s and Chloe’s. I really didn’t need to know or care about Oliver or Marc’s POV. Honestly, it didn’t add anything to the book.

Chloe got on my nerves fairly early in the book. I get that she is 19 years old in the book but come on. Everytime Chase goes to help her, she bolts. After the 3rd or 4th time, it got really tiring to read and she just ended up in worse trouble than she was in originally. Also, she played mind games with Chase. I mean, she let him think that there was something going on with Oliver when there wasn’t.  That just drove me up a wall because almost every scene was her moping over Chase, mad at Chase or a combination of the two.

Chase was just as bad. He was 31 and supposed to be a bad boy. Instead, the vibe I got from him, almost from the minute he met Chloe was of a 19-year-old who only thought with one head and that head wasn’t the one on his shoulders. He was constantly thinking to himself “Does she like me” or “How do I make her like me” or “I like her so much, what if she doesn’t like me“. At one point in the book, I really wanted to ask him if he had a man card because he wasn’t acting like one. He was obsessive to the point where he had spyware put on her phone to track where she was. The only thing that I got him on was when Chloe was playing a mind game with him so he went and slept with a club girl. He did have some moments of acting like an adult and acting like the big bad biker that he was supposed to be. But those moments were few and far between.

I thought that Chloe’s child abuse storyline was awful. She had dealt with being severely physically abused from the age of 7 and it left her with physical and mental scars. I can totally get why she didn’t trust people and why she kept running the first few times Chase tried to help her. She was conditioned to not trust men and it took her almost the whole book to trust Chase. I did think that the climax of that storyline was awful but, Chloe did what she had to do to survive her stepfather’s wrath.

I have a feeling that there is going to be a book 2 by the way the book ended. None of the main storylines were ended either.  I was left with questions about Chloe’s mother and stepfather that I really wish had been answered by the end of the book. The way the book ended was a little odd too. There was no sign that the book was going to end and when I swiped to the next page, I was brought to the chapter list.

How many stars will I give Chase & Chloe: 3

Why: An alright book with immature characters. I did like the plotlines and found them interesting but I couldn’t get over how immature Chase and Chloe were.