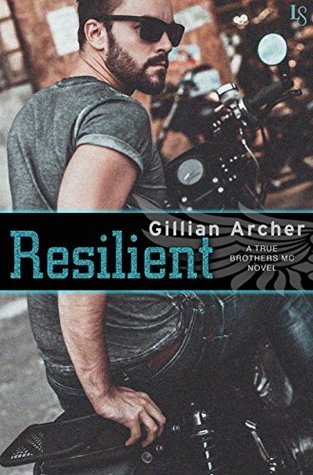 Where you can find Resilient: Amazon

Every loner needs a family—and a heart to call home. The bad-boy bikers of the True Brothers MC make good as a strong, silent type shows the right woman that he can speak the language of love.

With her lowlife father in prison for manslaughter, Nicole Walker keeps her distance from the biker scene—until she meets the stud running security at her best friend’s wedding. “Tank” is big, mean, and trouble from every direction. Yet Nicole can’t take her eyes off his chiseled body, or deny the pure electricity she feels when he returns her gaze. Guys like Tank are supposed to be a one-way ride to heartbreak. So why, after a scorching night in his bed, does Nicole only want more?

From his tour in the Marines to his sister’s disastrous marriage, Tank has seen the worst that life has to offer. Ever since his father’s death, Tank’s been fiercely protective of his family—and the True Brothers have always had his back. But nothing could prepare him for a woman like Nicole, who’s determined to break down the walls around his heart. When violence strikes, placing Nicole in harm’s way, Tank digs deep to find the courage to keep her safe—and the strength to love without limits.

I was looking forward to reading  Resilient ever since I read Rebellious.  I fell in love with the men of the True Brothers MC and couldn’t wait to read more about them. With Resilient, I got a treat. I got Tank, who fascinated me in Rebellious, and Nicole’s story. And I will say, it was a sexy read with plenty of drama.

I have become a huge fan of MC books since I started reading them a little over a year ago. Which is a change because I had told my bookish friends that I would never, ever read an MC book, that I didn’t understand why they were written. Obviously, I didn’t know what I was missing and I take my words back because MC books are among some of my favorite books to read. Something about bad boys who have a heart of gold gets to me and the men in the True Brothers MC are definitely that.

What I enjoyed was that the author didn’t go out of her way to make True Brothers this big bad MC. Instead, they were guys who were part of a club but had lives outside of it. They didn’t deal drugs, they didn’t go crazy killing people and actually, the only trouble that they got into was basically fought over turf. Not that I don’t like the tougher MC books but sometimes, you need normal when you read. And that’s what you got in this book.

Tank was a battle-scarred ex-Marine who lived for the club. Recruited shortly after he was medically discharged, the club quickly became his family. Well, his sister (who was a complete and utter biatch) was around but I wrote her off because of how she treated Nicole. He would do anything for the club and that included driving around the VP’s fiancée and her hot friend who had a major stick up her butt about bikers. I loved him because, underneath his tough exterior, he was a teddy bear. It always gets me when I see this huge, tatted up, bearded guy go mushy be it over a chick, an animal or a child (my 3-year-old wraps guys like that around her pinky finger all the time).

Nicole, I didn’t like from the other books. She came across as a snotty bitch and I was really surprised that she was getting a book with my Tank. But, when the author got into her story, I actually felt bad for her and it explained a lot about why she felt the way she did about bikers and MC clubs in general. Which made me wonder why she decided to hook up with Tank, to begin with, and then to keep hooking up with him.

Their romance was cute, once the sex scenes were out-of-the-way. Just their day-to-day interactions were adorable and I couldn’t get enough of it. I had a huge grin on my face while reading those scenes because they were unexpected and they normalized Nicole and Tank’s relationship.

The sex scenes were hot. But what got me is that Tank was pierced. Not Prince Albert but one that would bring a woman a ton of pleasure because it would hit her clit when he was thrusting. Very interesting because I have never heard of such a piercing. On that note, this is the second book where the penis was pierced. Makes me wonder what the next book would be like, piercing wise.

I did call what happened to Nicole and how it tied to events in the book. Not that it took away from the book because it didn’t dampen my enjoyment of it. What kind of pissed me off was how dismissive Nicole’s mother and brother were to her. She had every right to be upset/mad and they were like “Just deal”. I am glad that she didn’t just deal and I am glad that Tank was there was stuff went down.

Now the last part of the book did kind of throw me for a loop. I was not expecting what happened to happen and it kind of freaked me out. But the end of the book more than made up for me being blindsided. I can’t wait to see whose story the next book will be.

How many stars will I give Resilient: 4

Why: A sweet romance with plenty of action and characters that you might not like but are certainly memorable